I'm still here.  I haven't fallen off the face of the earth... much.

I'm recovering from a bout of bronchitis that knocked me flat for about 5 days.  I knew I was coming down with something on Friday last week but we still went out to dinner and a concert for our 27th anniversary anyway.  Not a great idea.  I spent the rest of the night coughing and by Saturday morning was feverish and felt like I'd been run down by a 16 wheeler.  I spent the entire holiday weekend down and out.  I missed work on Tuesday and when I went in on Wednesday my co-workers sent me home.  But I'm feeling much better now.

In homesteady news, I did manage to get the little chicks (or as V calls them- the Debutantes) moved out to the coop with the rest of the flock on Monday but left them in the kennel for 'introductions'.  Today, they were released.  So far so good.  Abby, our dominant hen has been picking on them a bit- but not too severely (at least no blood!) and River (the bottom of the pecking order) also took a few swipes at them.  Mostly, the rest of the hens seem to be ignoring them.  I can live with that.  I was worried about integrating them into the flock.

And we had a birthday here.  My middle child is now 16!  How did that happen? 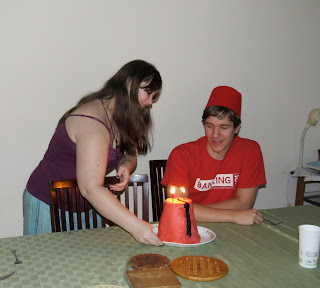 Justine made his cake.  Shaped like a fez.  It was awesome.  Aren't big sisters great?!

I've gotten my little tomatoes replanted (as many as I had replacements for) and put extra chicken wire cages around them for protection. A few are still little stumps and I'm not sure they will recover.  We'll see. I desperately need to get the rest of my garden in but the weather has not cooperated. We had close to 4 inches of rain over the weekend and storms keep coming through on a pretty regular basis.  We've had the sirens go off several times this week and had 70+ mph winds.  Nothing like the folks in Oklahoma!
I'm hoping that tomorrow it will be dry enough to get a few things done.  We agreed to help my friend Jim with his garden by tilling up a patch for him but it has been too wet.  Maybe tomorrow afternoon.

Later this coming week, after the boys are out of school we're hoping to head down to my parent's farm.  They have had bad weather there as well and have 3 trees down that we're going to help them remove.