A Friday kind of Thursday

I've got a couple of vacation days coming up so today was my Friday.  I'm kind of excited to have a 4 day stretch.  I've got a bunch of things to get finished this weekend so I've got a to-do list a mile long.  I've been hoping to have time in the evenings after work to get some sewing done but it just hasn't happened this week.
Last night I15 had a band concert.  It was a lovely concert but it's never a good thing when they have to call in the janitor with a mop between bands.  There is a stomach bug running rampant around town and someone in the back row vomited during the concert.  How mortifying for a teenager for something like that to happen.  The same bug is running through at work.  One of the units I frequent has been quarantined until next Tuesday because so many staff and patients are ill.  I was a bit concerned because I had been seeing patients on that unit on Monday morning.  At least I made it through the 48 hour incubation period and am still well.
I wish V could say the same. He doesn't have the stomach bug but is having sinus trouble again.  He has had such trouble for the past couple of years.  It wouldn't be so bad except he was up half the night- keeping me up in the process.   I do hope he figures this out or recovers soon.  It is getting really old.
I thought I'd give you a little sneak peek of my holiday project for K12.  I found this fabric in my stash last weekend: 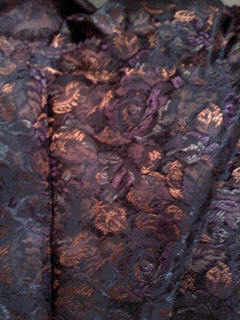 Isn't it a lovely brocade?  The thing is... I have no earthly idea where it came from.  It's obviously a remnant from someone's project- just not one of mine.  There is a piece that's almost 2 yards and another good sized scrap.  It has had something cut out of it but no one I know cuts things out with pinking shears.  I asked my sister last weekend when I saw her if it was from her but... nope.  V wonders if it is something he picked up during one of his dumpster diving hauls- possible- or I thought maybe from his Mom. But he doesn't think it's from her.  It was stuffed rather unceremoniously in a plastic bag along with some brown tulle so I do wonder if it was someone's costume for something.  I'll probably never know.
Anyway- this will become a brocade vest for K12.  He has recently decided that bow ties are the most awesome fashion accessory and he is quirky enough to wear something like this to school, with a shirt and bow tie!
Now, I've gotta get to sleep- I'm weary.  It's been a long week for only working 4 days and I've got a busy, busy weekend planned.
Posted by Judy T at 9:58 PM