Eighteen years ago my life changed forever.  One Saturday in May, V was working as an archaeologist at a dig at the Tredegar Iron Works in downtown Richmond, VA (it is now run by the National Park Service).  As he was monitoring some equipment, he spotted something large and round.  He halted the equipment and leaped into the trench to see what it was.  It was round and made of iron and looked for all the world like a cannon ball.  The other workers warned him off because after so many years, an armed round from the Civil War would be filled with nitroglycerin and could be highly dangerous.  Not being one to always listen to the voice of reason, he rolled the ball out of its spot to reveal a bright green spot on the other side- the sign of a potentially armed round.
The site director was notified, the Navy Bomb disposal squad was called and a section of downtown Richmond was evacuated- including the Federal Reserve Bank.  The bomb disposal guys yelled at V when they got there about how dangerous and stupid he had been because people are killed almost every year by old Civil War rounds.
The round was packed with explosives and shielding and detonated, proving it to be a dud... a spiked round.  Relieved, everyone returned home.  V consumed much of a 6 pack of beer to steady his nerves.
The following morning, a lovely spring Sunday, I got up early.  At the time, I was very, very pregnant and while out on the deck letting the dogs out, my water broke.  V refused to take me to the hospital until he had drunk at least one cup of coffee.  Seventeen hours later, our lovely baby girl was born. 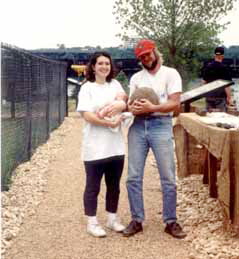 Two bombshells in the same weekend. 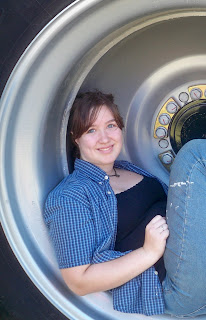 Our lives have never been the same.  We have been truly blessed.

Happy Birthday my Darling Justine!!  Today you are 18!!

In case you are wondering- the combine tire photo is one of her senior pictures.  I snapped it last year at Old Threshers.  Even with no make-up and after a hot dusty day among steam engines she is beautiful and this is one of my favorite pictures of her... partly because it is so... her.
Posted by Judy T at 8:21 PM