Brrr... It's cold outside!  It's currently 39 degrees outside and we're predicted for a hard freeze tonight or tomorrow night.  Ok.  I'm ready.  Of course, we got low enough last time around that I lost just about everything so it's time.  The peppers are dug and brought in, the broccoli harvested and the last of the bell peppers salvaged.  And honestly, even though this borders on sacrilege... I'm ready.  I've got tomatoes to process from those ripening on the counter and I'm actually TIRED of dealing with tomatoes.  I didn't think I'd ever say that.  But it's time.  I've got plenty in the pantry and freezer for the next year and while I'll miss having fresh tomatoes to eat (I refuse to purchase tomatoes in the winter!) I'm good with the freeze.  Hopefully we'll have a few peppers off the plants this winter.
But, it's Friday and that means that, hopefully, I can get back on track with my Independence Days posts.  I do love this challenge (although it's not really a challenge, more a way to organize your progress) because it helps me categorize what I've been doing to see that I am actually making progress.  Here goes for the week:
Plant something:  Only a bit more mesclun mix in the greenhouse.  I used up old bits of seed last time and had REALLY poor germination so I replanted.  That's probably OK since this will put it a couple of weeks behind the lettuce I planted before.
Harvest something:  Dug potatoes, salvaged a few peppers and green tomatoes and cut my single fennel bulb.  I also harvested more from the broccoli that would not die!! 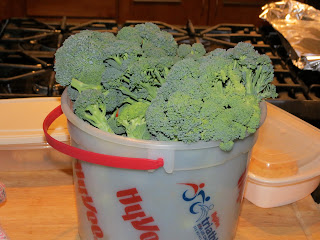 This is a 5 quart pail filled to overflowing.  I've lost track of how many cuttings this is... I think six or seven, if not more.  And still some good sized heads.   Truly amazing!  These are still the same little seeds I started waaaay back in March and have gone on through record heat and drought.
Preserve something:  Froze some spaghetti sauce and some enchilada sauce. Dried some Orange Thyme and English Thyme.  Froze some roasted tomato soup in lunch sized containers for me.
Waste not: um...  can't think of much other than the usual recycling, composting and scraps to chickens.
Want not:  Not much unless you count V's purchase of the air rifle over the weekend. It should help with pest control, especially since he has already taken out several chipmunks.  He noticed today that the ones he has seen recently look like scared youngsters.  Oh, I've saved some seeds this week- that counts.
Eat the food:  Oooo..... lots of yumminess!  Enchiladas with homemade sauce. Stuffed chiles,  Broccoli rice, roasted veggies with home grown squash, potatoes and thyme.   Cookies and biscotti with fresh eggs.  Mmmmm....
Build community food systems:  Eggs to work, that's about it. With my recent success at getting onto Facebook, I've been looking at linking with some local organizations so maybe I can get more involved.
Skill up:  Hmm... nothing I can think of.  I've been pretty boring this week.

Now, it's late(ish) and it seems like it's been a long week, even with a day off in the middle.  I don't know what I was thinking...  With switching my day off I'm now scheduled to work 6 days straight next week.  Blah!  Quilting will never get done at this rate!
Posted by Judy T at 9:56 PM