What a difference a day makes

Whew!  What a busy time!  Of course, V has had the brunt of the hard work and I am just the helper, holder and gofur.  But a lot has been accomplished.  Behold! 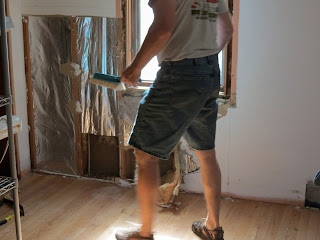 On Sunday afternoon, V worked to remove the old drywall from the library room in the addition.  The tiny bit of old insulation was removed along with the mouse nests in the wall (Eww!) 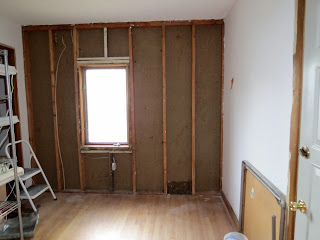 Finished with interior demolition, we stopped for the night. 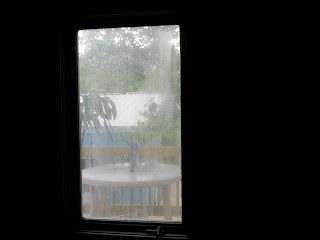 You can see why we wanted to replace this window.  It is fogged and parts of the frame are water damaged and rotting. 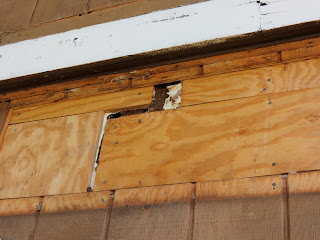 Of course, this morning, removing the siding to begin the rest of the work for installing the new window unveiled more problems.  Evidently, according to one of the old owners, cutting corners was common.  They pieced thing together from scraps rather than use a solid piece.  There were gaps in the sheathing which allowed the mice to move freely from the attic into the walls.  sigh...
And we seem to have picked the hottest, windiest day of the year to rip a hole in the side of the house!  We had both a heat advisory and a wind advisory for the day. 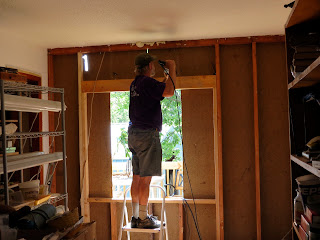 Framing for the new window going in. V had to do quite a bit of work on the wall, both inside and out. 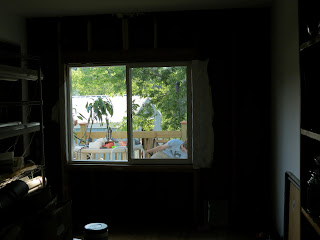 But the new window is installed.  It provides so, so much more light.  Next we will work on the North wall but not until we get the garbage barrels emptied!  Tomorrow will see the siding going back up, the inside outlet and outdoor floodlights re-wired and maybe some insulation in the wall. 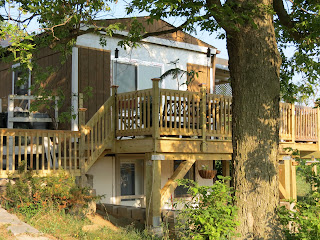 The outside will look so much nicer when the siding gets up again but the window will be fabulous.  The window is on the West side of the house.  In the winter, the extra light will be wonderful and we've got the big hackberry tree that shades the house in the summer.
Now, it's time to relax after a hard day.  Tomorrow brings more.
Posted by Judy T at 9:33 PM