I had a fabulous day. I had a lovely, peaceful drive, a wonderful lunch with my Dad, got to see several of my relatives (Aunt, Uncle and several cousins) and my 3rd grade teacher! I had several hours to visit with my parents and got a laundry basket about half full of pears. And I get to keep the basket!
I feel refreshed, more than a good nights sleep would have given me. It's a totally different type of refreshment.
I ran a few errands on my way home, swinging through Kalona again to pick up some Lebanon Bologna from the cheese house there. Lebanon bologna is made near V's hometown in Pennsylvania and he grew up on the stuff. He was thrilled a few years ago to learn that they occasionally carry it out here. So I stopped in to pick up some for him as a surprise.
I also drove past several lovely barn quilts. These have been growing in popularity here and are quite beautiful. 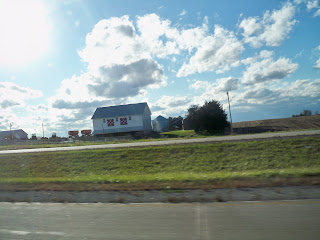 This picture doesn't do it justice but at highway speeds, snapping photos one handed out the window I was lucky to get my camera out in time to snap it at all. I'll try to make a tour to get better photos of some in this area and post them. I saw some lovely ones on my way through back roads to Kalona but by that time it was SOOO windy that I didn't want to try to get any pics while driving.
The sad part of the trip was seeing all the flooding around here. We've gotten 5 inches of rain this week. The farmers have a record setting crop in the fields and can't get in to harvest it. Even though I grew up in a farming family, I'm not a huge fan of industrial agriculture. But it still almost makes me sick to my stomach to see an entire field of corn, ready to harvest, standing in several feet of water. 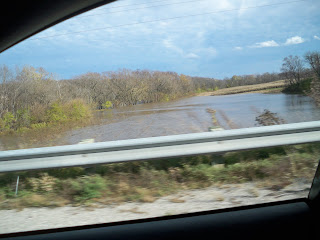 Another out the car window shot. Fortunately the portion of this field nearest the highway had already been harvested. This shot is taken probably 150 yards before the highway crosses the river. This is the Skunk River, well outside its banks. The other side of the road had water standing in an unharvested field but I couldn't get a good shot.
Dad thinks that this will probably be a year where the crops don't come in until the ground freezes. He says he remembers harvesting into January because of rain. I don't remember that late but I remember having them in the field on Thanksgiving Day because they could.
Here's hoping that it dries out a bit here. Five inches of rain in a week in October is a bit much.
Posted by Judy T at 7:41 PM