It was a lovely day here.  Definitely a fall feel in the air. We only hit the mid 60's!!  But it was sunny and breezy- a terrific day for airing out the house and getting a few things done around the house.
V and the boys worked to put the pool away for the year.  J17 helped me out in the house.
After the party, we were left with more than half a case of Bud Light.  V and I aren't huge beer drinkers anyway and especially not this one.   We're much more small, craft brew drinkers when we do drink beer. So what to do with that much beer that we would really prefer not to drink?  Beer bread of course! 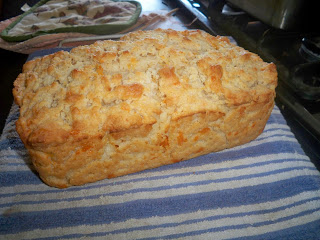 I made the first batch Saturday evening and it went quickly.  I made it according to the recipe and while it was good, it was calling out for something more.  So this morning, I added some shredded cheddar. 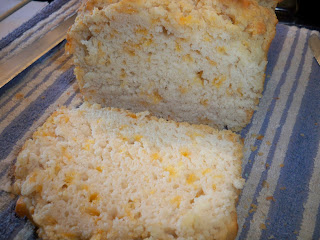 Mmm... I'm seeing a whole series of variations since we still have 14 cans left!  At least it's cool enough now that I don't feel bad running the oven.
My other project for the day was processing baby corn.  We do like our stir fry and one of the fun things in it has always been the baby corn.  So this year we decided to grow some ourself.  It is actually a type of popcorn. 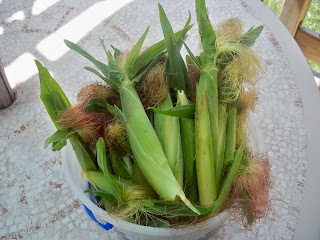 This one is Chire's Baby from Baker Creek.  Good thing we're growing it for baby corn and not planning to let any mature for popcorn this year since I got it planted so late.  It's just now silking so there is no way it would be mature by first frost. 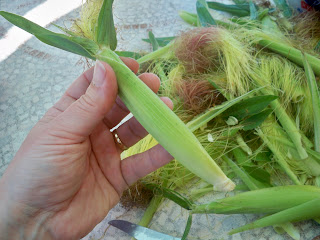 Isn't it cute?  For baby corn, you pick it a day or two after the silks appear. 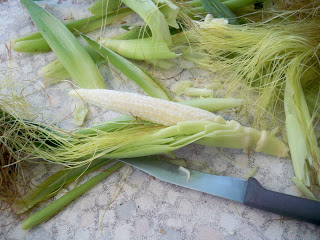 Blanched and cooled, I have 4 packages in the freezer for fun in stir fry this winter. 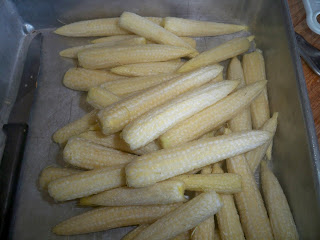 Hopefully I can get a few more packages in a few more days.  There are still more ears forming out there.
One thing, if you want to try this, be aware that if you want to have some mature for popcorn you would need to have plants specifically for that.  The ears are so tightly affixed to the stalk that I basically destroyed the stalk picking them.  Not like other corn I have grown in the past.  I've still got some seed so maybe next year we'll grow some for popcorn.  By then I14 should be out of braces and will be able to eat it!
Posted by Judy T at 6:56 PM