The last gasp of summer

It was an absolutely beautiful day today!  The last of summer. I guess technically it would be Indian Summer but that isn't a very politically correct term.  Much was accomplished here.
V skipped out of church this morning to work on the retaining wall by the back door.  There is a chance of rain this week and we don't want mud to wash down in front of the door.
The first course of blocks was in, complete with drainage when the children and I got home. 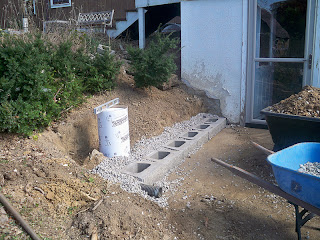 The white tube you see is the concrete form for a support pier for the deck extension.  It goes down another two feet into the soil.
He made quite a bit of progress today: 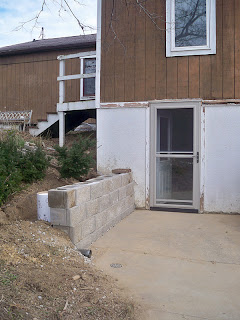 There will be one more course of blocks, then we will pour the concrete pillar and back fill.  We will have another retaining wall on the other side as well.  Each of those blocks weighs 85 lbs so I'm glad he was doing all the lifting!!
J17 and I worked on the chicken coop- cleaning out and replacing bedding. 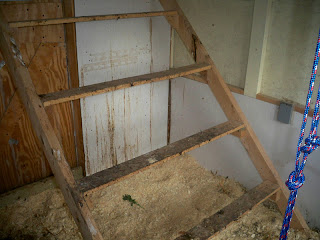 Since they have only been in there for a few months I didn't take out all of the bedding since some of it wasn't too bad.  I may regret that come spring.  But at least it has been cleared out under the roost where it REALLY needed it. 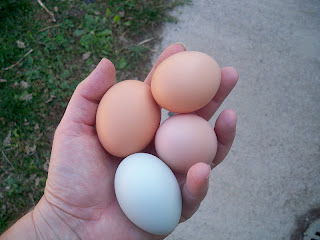 We collected eggs while we worked and got a few more later in the afternoon.  But the poor chickens... we moved the feeder since I didn't like where it had been.  They were totally freaked out and afraid to enter the coop for a while. Silly bird brains.  See, Abbie isn't amused: 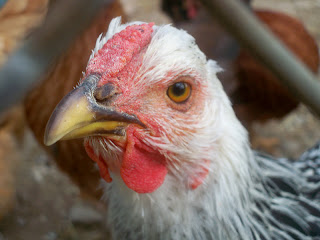 Apple turnovers were baked for afternoon tea on the deck.  Mmmm... 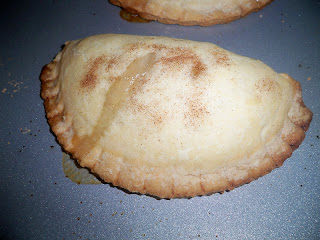 Frozen turnovers from Wilson's Orchard across the road.  Yummy!!  All handmade at the orchard kitchen, baked up fresh in my oven.
I got part of the frost killed garden pulled out.  I did the peppers but the tomatoes will wait for a bit.  They are at that awkward state of being dead where they are floppy and the vines are hard to break.  Probably if I had cleared them while the vines were still crisp they would have been easier- or if I wait until they dry out.  But today they were just too annoying and I was easily frustrated.
For dinner, I cubed and roasted one of my Speckled Hound squash. 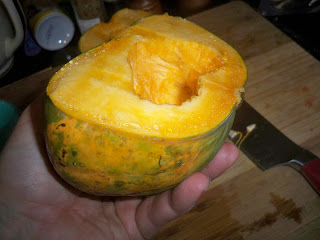 I wasn't terribly impressed- but it wasn't a fair taste test.  This was a small one that wasn't fully ripe when picked but the frost killed the vines so I didn't have a choice.  All in all, it wasn't bad roasted with onion, garlic and some fresh sage tossed in at the end, sprinkled with parmesan.  J17 liked it.  Hopefully the bigger ones will be better.
And, finally, this day ended with a glorious sunset. 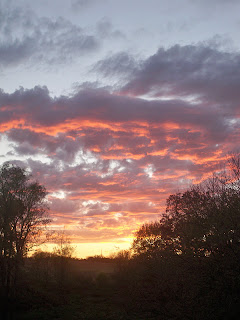 A fitting end to a beautiful day.
And tomorrow is to be equally beautiful... and I've got the day off.  Mwahahaha...
Posted by Judy T at 7:32 PM