We had a great, but not typical day.  This morning, we got up early-ish and headed South.  We attended church with my parents and then headed to the farm to celebrate Dad's birthday.  Okay, his birthday isn't actually until Tuesday but we can't really make the drive then.  Surprisingly, we were also joined by my brother who stopped in for lunch and stayed an hour or two after.
While we were there, Dad had a task for the boys: 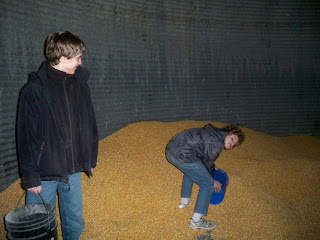 Hauling a few buckets of corn out of the almost empty grain bin. 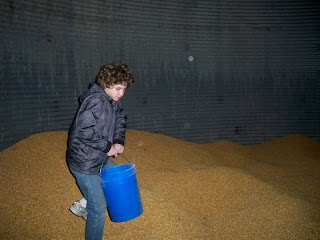 Dad is having trouble climbing in and out of the bin these days but wanted some more corn to crack for the birds before their tenant finishes cleaning out the bin. He stood there and chuckled as he watched them climb in and out, shaking his head and saying "oh, to have knees that work like that again".  He was glad for the help and the boys were surprised that the task didn't involve that much.  I guess we've got them trained that when we've got a job for them to do, it involves WORK.
Other than visiting and driving, we didn't do anything today.  So... it has been a relaxing but not at all productive weekend.  However, tomorrow is my day off so, of course, I've got it jam-packed with plans.  But I'll let you know about those some other time.
Posted by Judy T at 7:41 PM