I made sourdough pretzels last night.  Mmmmm....  They could be my downfall!  The recipe makes around 20 pretzels (I actually got 21) and at the end of the evening, there were only six left!  Of course, I think V ate half of those.  He was raving about them and saying that they took him back to his childhood days when his dad would stop for soft pretzels on the way to the ballpark.  They really weren't that difficult and I'm sure these will become a regular at our house.
But you all want the recipe, right?  I spent a while looking for recipes and was amazed at how many call for adding extra yeast.  Um... aren't these supposed to be sourdough?  I finally found a recipe that looked good and I tweaked it a bit.  Here goes:
Sourdough Pretzels:
In a large mixing bowl place:
1 1/2 cup proofed starter -I started with a cup of starter and fed it (1/2 cup warm water, 1/2 cup flour) til I had 1 1/2 cups and let it sit for 8-12 hours)
Mix together:
1 cup hot water
2 Tablespoons butter
3 Tablespoons sugar
2 teaspoons salt
Let cool to lukewarm and add to starter mix.  Stir into this 1 cup at a time:
4 cups all purpose flour
Place this on a floured board and knead in 1 1/2 cups more flour. (5 1/2 cups total)  The dough will be VERY stiff.  In fact, kneading in the last half cup of flour gave me a great upper body workout ;-)
Place this in a greased bowl. Cover and let rise for 2 hours.
When this has risen, pinch off pieces of dough about the size of an egg.  Roll these into 'snakes' about 18 inches long and form into a pretzel shape. 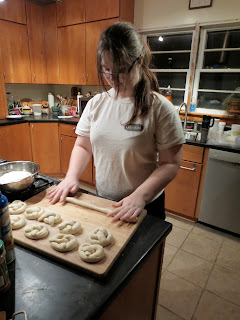 You don't need to worry about having a floured board for this.  The dough was stiff enough that it didn't stick. 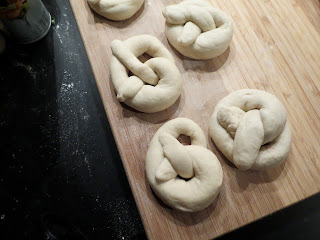 Meanwhile, bring to a boil a pot of salted water.  Drop the pretzels into the boiling water a few at a time. 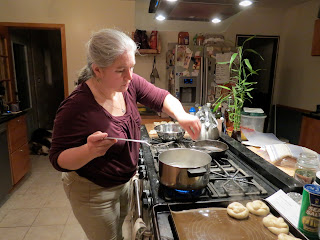 You don't want them to touch.  They will initially sink but will soon pop to the surface. 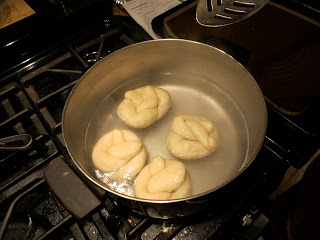 Cook them for about 30 seconds after they float.  (my source recipe says that your pretzels will be chewier the longer you boil)
Remove with a slotted spoon, place on baking sheet and sprinkle with coarse salt. 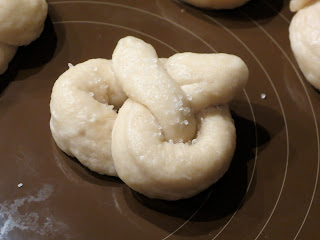 My recipe didn't specify if it should be greased or ungreased baking sheet so I just used my silicone liners :)
Bake in a preheated 425*F oven until desired shade of brown. The source recipe said 15 minutes but it took mine longer than that. 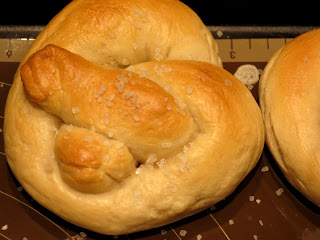 While these were still tasty today, they definitely were much more delicious when fresh from the oven.

What will I do differently next time?  I think I'll try to roll my snakes thinner and have more 'gaps' in the pretzels.  I think the rolling and shaping will get better in time.  V found several of our creations 'disturbingly like something the dog left'.  Thanks a bunch!  But it didn't stop him from eating lots of them.