This morning, J17 and I ventured out to the fabric store for their big holiday weekend shopping extravaganza. Whew!  I've had my fill of crowds for the year.  Who would have thought that the fabric store would have been such a hotspot for shopping.  Of course, maybe it's a sign of the times that more people are doing handmade holidays this year.  I saw a LOT of fleece go through the cutting lines.  We stood in line for probably 35 minutes to get to the cutting table.  But we got some awesome deals.  I went today because they had quilting cottons for $1.99.  I wasn't too impressed with the selection but I got a couple for future use.  And they had $.99 patterns again so J17 picked up a few. And I got fabric for a gift for V.  I don't really have hope that I'll be able to get it done in time for the holidays but you never know.
We have had the pattern for years and years (probably 25!) but I've never made it: 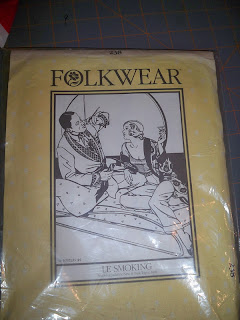 V has wanted one of these smoking jackets for years- not because he smokes- just because it would be fun and a bit pretentious.
We selected fabric: 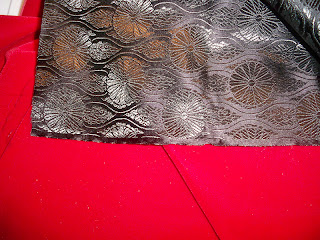 Red velvet and a silvery/black brocade for the lapels.  The red velvet was one of only two non-sale items we purchased but since we were there in the morning, we got to use a 50% off coupon for it.  The brocade was already 40% off.  On top of the 50% off a single item, we had a coupon for 25% off the entire purchase price- INCLUDING SALE ITEMS!!  So, the brocade was already 40% off plus an additional 25%.
We came home and I spent part of the afternoon organizing the sewing room- well, at least more than it has been, considering that the room isn't even finished! 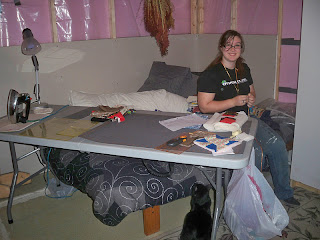 The sewing room is also the guest bedroom.  Above, J17 sits on the futon bed by the table that holds the cutting and ironing stations. The table is sitting over the corner of the bed so I don't block access to the room from the other door.   Across the room is my antique library table that doubles as a sewing table.  V installed light under the cabinets for better lighting. And, yes, we still have stuff in boxes!  And, below, the basket you see in the corner of the photo is a market basket I made, stuffed full of patterns. 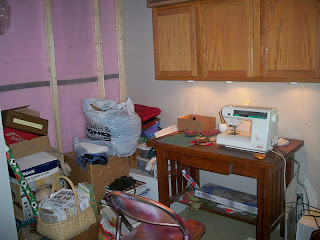 Below is the whole room from the corner/door: 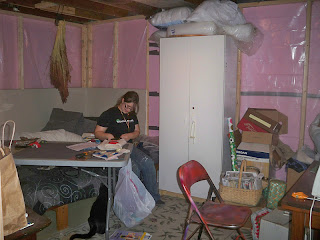 Sewing table to the right, storage cabinet straight ahead, to the immediate left (barely visible), the antique dresser that holds most of my fabric.  And, yes, broom corn hanging over the bed, a stash of empty shoe boxes by the craft cabinet and quilt batting up near the ceiling.  Whew!  It's cram packed!!
But on to the dreams of empire!!  J17 and V seem to think that this is a viable idea, although I still doubt my skill to pull it off.
J17, and, to some extent, I have been fans of Steampunk- the neo-Victorian fun fashion.  To that end, we have, over time, purchased numerous dress, corset, shirt and jacket patterns.  I hope to open an Etsy shop, starting with wall art/quilts with a steampunk theme.  And a few other things thrown in as well (Maybe some Celtic knotwork pieces).  With the possibility of branching out into custom Steampunk and/or cosplay clothing.  If I can market right, I may have a side job... not that I don't like my job, I'd just like something a little different on the side.
Opinions... ideas... words of warning....?? Am I totally crazy??
Posted by Judy T at 8:00 PM