It was a quiet but productive day today.  Everyone slept in a bit. V and I stayed up later than usual last night watching a movie, so this morning I actually slept until 8:30!!  That late is usually unheard of for me.
Sadly, I feel like I'm coming down with something, I've got a cough and was running a low fever this morning.  That being the case, I begged off going to J17's orchestra concert this afternoon since I didn't want to inflict my cough or my germs on an audience.
I didn't feel too bad though, so I spent some time outside continuing to put the garden to bed for the winter.  I tackled the tedious but necessary job of pulling all the dead runner bean vines off my trellis netting.  I planted some scarlet runner beans this year.  Actually, they were the last of old seeds I had. The first time I tried them, bunnies ate off every one.  I didn't have too much seed and the weather wasn't too cooperative for them this year, but I let some dry on the vines for seed for next year.  I shelled those out this afternoon as well. 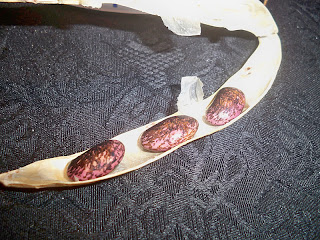 They don't produce a lot of beans per pod but they are beautiful! 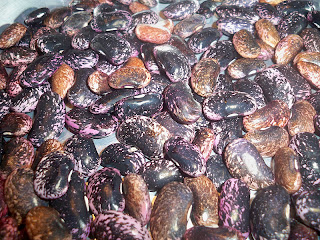 I really like this photo- I may have to crop it for use as a header sometime.
While I was out in the garden I also pulled and stored all the tomato cages and noticed that, amazingly enough, the marjoram I had planted out there was still alive.  Good thing, because the one I had in a pot on the porch all summer died as soon as I brought it inside.  So, I did a bit of a swapsie-  I ditched the one in the pot and potted the one from the garden.  Hopefully it makes it.  I do love marjoram (or any fresh herb).  I've put it in a sunnier location than I had the other one.  I think it didn't get enough light.  Our good windows for plants are fairly limited.  But I've now got it on the kitchen counter to the side of the sink.  I've got a pot of lemon thyme on the other side of the sink that is doing well so I'll cross my fingers.  The window faces south so if I can keep the cats from knocking them over, I think they'll be fine.
While I was in the garden and J17 was off to a last rehearsal and then concert, V and the boys were working out back.  Before we backfill behind the new retaining wall, V wanted to lay some drain pipe and also some ethernet cable.  Yes, we will soon have internet access in the shop! 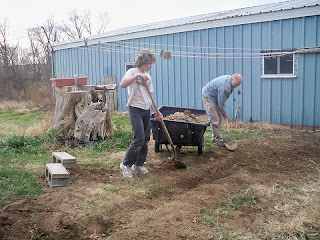 Above, V and K11 backfill the cable trench, below, I14 starts filling in behind the wall 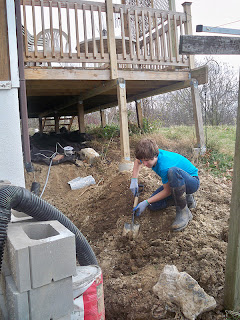 V wants to eventually set up an office out in the shop- there was an office there before but it was in bad shape.  He's thinking about getting a wood stove for out there sometime to heat not only the office space but also make the rest of the shop more useable in the winter months.
He also spent some time mowing the sledding trails down the hill- priorities, you know...
Afterward the poor thing was so tired, he had to hake a nap with Spaz: 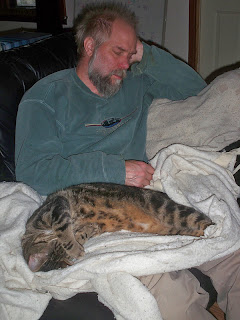 Aren't they cute.  Spaz definitely has a rough life.
One thing we didn't get done was the remaining wire on the chicken run top.  It was warm today (around 60F) but incredibly windy and neither one of us felt like manhandling rolls of chicken wire overhead or being up on ladders in the wind.
And I haven't taken time to work on my apron either.  Maybe tonight after dinner.  I've got a deadline coming up.
Posted by Judy T at 5:11 PM