Today I realized that small kitchen appliances, like the food they prepare, have seasons.  Summer is the season of the food processor- making pesto, salsa and salads.  Now, we are entering the season of the immersion blender.  V got me one of these as a holiday gift quite a few years ago.  Honestly, when I opened the package I was thinking- what on earth am I going to do with this...  But I have grown to love it.  This is the season of creamy, hearty soups, blended to perfection with the hand blender.  Mmmm...  Yesterday's lunch was a wonderful blend of sweet potato, broccoli, celery, onion and garlic in a chicken stock base.  All blended together to a creamy goodness.  Fall and winter is my season for thick soups.  Soon we will enter the season of the stand mixer- concocting holiday goodies.  Winter is also my traditional season where I rely more heavily on the crock pot.  So, even appliances have their seasons.
My back was feeling a bit better today.  Still not 100% but better enough that I could do several loads of laundry and get a sewing station set up in the basement.  My apron was cut out and I got a start on sewing it. 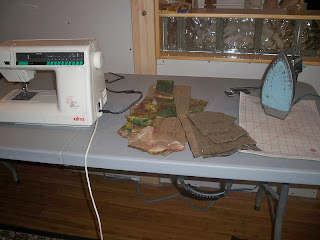 Please, if I ever decide to make another apron- remind me of what a pain in the Bu** this pattern is! 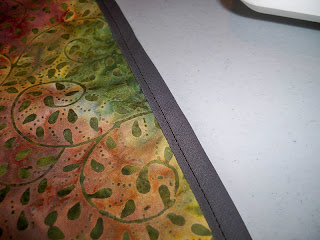 It involves LOTS of bias tape edging,  It looks good but it's a bit tedious.  The pattern actually called for making your own bias edging.  Um, no thanks, even though I have the little tool to fold it.
You can see by the kitty paws below that Spaz helped hold the pieces in place: 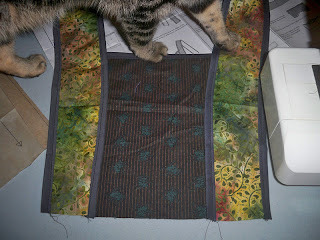 You can always count on cats to help with sewing- especially with the flimsy pattern pieces!!
Even though I had an eye appointment this afternoon. I still had time when I got home for some cooking.  Lasagna for dinner: 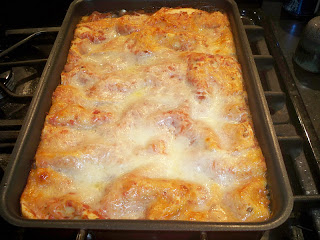 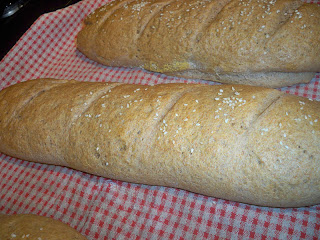 I tried a new recipe for a whole wheat Italian loaf.  It would have been much better if I hadn't forgotten to put the salt in the recipe.  I was mixing it up as the children were arriving home from school and got distracted.  Oops...  Still, it has promise.  A bit more dense than I think of for Italian bread but that's the whole wheat.
V was also busy today.  He got the last big pier poured for the deck extension.  Isn't he cute with his little cement truck?? 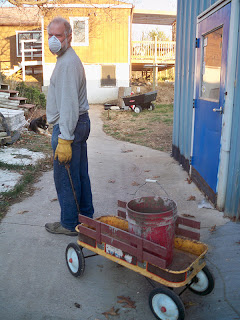 He mixes it up one bag at a time in the shop so he can use his big drill with a special mixing tool attachment and hauls it in the wagon to the house so he doesn't have to carry it so far.  He's saving his back as well.  And, yes, he's wearing a mask to avoid breathing concrete dust.  Too much nastiness in there.
He's making good progress on the back: 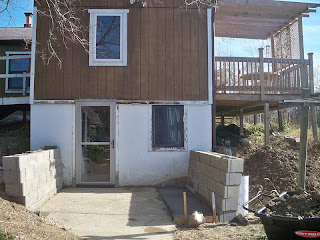 Both retaining walls are now in place and the piers on either side are poured.  If you look at the deck on the south (right) side of the house- the extension will be at the same height wrapping around this end of the house right over the back door. We've got a big pile of dirt that will be used to backfill behind the new wall to even out the slope under the deck.  Because the space between the new walls is wider than the existing sidewalk, V poured an extension last night: 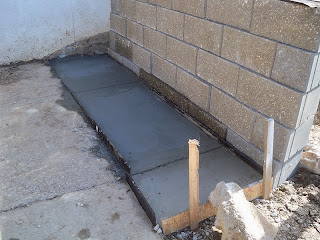 So this will be a little back patio under the deck on the West side of the house.  We spend a lot of time outside in the summer so this will be additional living space.  There is a tree on the northwest corner that will provide shade in summer.  We're doing the retaining wall and concrete footer work this fall and will tackle the deck build next spring or early summer.  It's our last major project except for window replacement (but the windows will be done piecemeal over the next few years).  I'm still waiting for a room to be completely finished but, hey, it's coming along.  And I'm getting used to living in a construction zone!!
I hope you all had a productive start to your week as well.