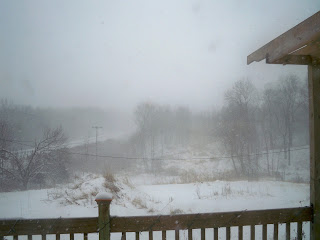 This was the view out my side door this afternoon.  Winter is definitely here.  We're having snow, wind and temps only in the single digits.  School was let out 2 hours early so all of the children are home safe and sound and I've got biscotti in the oven.
I feel like I've been busy all day but haven't accomplished much.  This morning I took I14 to the orthodontist and then stopped at the grocery store on my way home.  I arrived home just as the road conditions started to really deteriorate.  I did some dishes, got a big pot of chili on to simmer and otherwise puttered around in the kitchen: slicing ham for sandwiches this weekend, repackaging some Italian sausage for the freezer and making some potato soup for V and I for lunch.  I fed the chickens and gave them a flake of straw to scratch through in the coop since I'm not letting them out today.  The dears have already provided us with 8 eggs today.  I'm thinking that will be it for the day but I'll check one more time around dark to be sure. River hasn't been laying so we've got only 9 hens laying at the moment.
Otherwise, it has been a laid back day here. I had hoped to do some sewing but it hasn't happened yet.  Maybe later this afternoon or this evening.  With the children home it seems so much later than it is, that and the clouds/ snow is making it seem darker.
Mmm.... I'm smelling those biscotti.  This is the first baking so I'll have to let them cool a bit and then slice them and do the second baking.  I found a recipe for honey, orange and lavender biscotti and since I happen to have a bunch of lavender blossoms, some oranges and some honey they seemed like just the thing.  I'll let you know how they turn out but they are smelling heavenly.