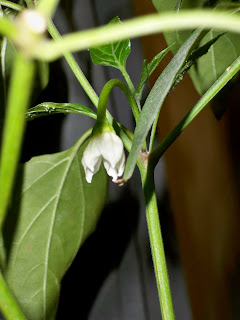 Jalapeno blossoms in February!
and, no, it's not whitefly on those leaves- I checked after I looked at this pic! 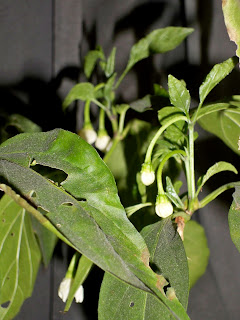 The plant is loaded!  I counted at least 10 blossoms and lots of new growth.
These blossoms are on our potted jalapeno.  We have had this same plant in a large pot for going on 5 years now.  It is an amazing thing.  It has a trunk!  Every spring we haul it outside, pot and all, and every fall we bring it in.  It is currently living in K10's room since he has a bright West window.  It seems to like it there as it has spent the last two winters there and has done well.  He does a good job of taking care of it- watering it when it needs it- so I haven't looked at it for quite a while.  Imagine my surprise when I discovered that it was blooming.
Below is today's arrival:  Biodegradable 'plastic' mulch. 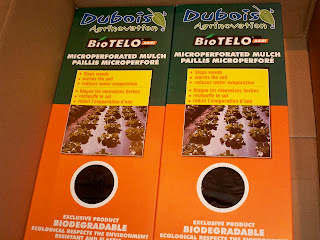 It is an Italian product made from corn- which seems odd to me that something like this wouldn't be produced here in the US considering how much corn is produced here.  Anyway, we will be giving this a try this year.  It comes in sheets 54 inches by 33 feet.  We have such a huge weed seed load in the garden still, even after two years of cultivation, that it is a constant struggle.  Of course, it was an entirely a new bed and before that had been a barnyard for 50 or more years, then allowed to go fallow for a year.  The weeds took over and we've been fighting ever since.  Last year, I used newspapers and grass clippings for mulch but we ran out of newspapers for the size garden we have.  We got several packages of this stuff but we're still saving newspapers for the rest of the garden.  I'll let you know what I think of it at the end of the season. It apparently is supposed to break down in 90 to 120 days, depending on weather conditions.
And finally, a photo of J16, just because.  She is feeling better.  And check out her 'locally grown' t-shirt! 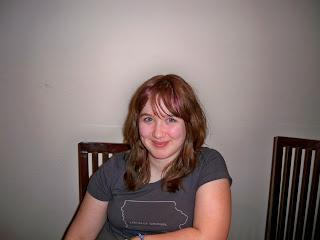 But, I'm saving the best news until last.  All of the counters came in today at the store and the counters and cabinets will all be delivered tomorrow morning, along with the new subflooring and tile backer boards.  WOO- HOO!!  Finally! One less thing to worry about.
Posted by Judy T at 8:28 PM