Too busy for many photos

We got a rather later start today than we had hoped.  Everyone slept in after yesterday's adventures.  And, of course, things didn't go exactly as planned.  In some things we are ahead of schedule and in others we are behind.
We had to make a run to the home improvement store after more primer/sealer paint and new rollers since I decided that my old ones were too ratty to use again.  I got the Picasso wall primed with two coats and then had to let it dry.
V was working on the plumbing and was trying to figure out where to cut the holes in the sink base for the pipes.  Luckily, I reminded him that we had to work from the corner cabinet and have all of them in place to make sure the sink base was lined up correctly before he drilled holes.  So... we hauled all the base cabinets in.  They are currently lined up but not fastened down.  We still need to shim them a bit to get them level but they're really not too bad. 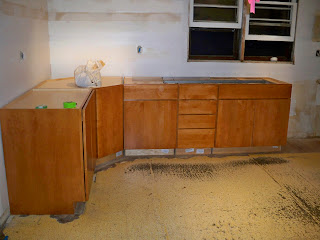 We were fortunate that J16's current beau came over this afternoon to help out.  He was a tremendous help carrying heavy cabinets.  At one point, I was nearly in tears when we realized that the 36 inch lazy susan base corner cabinet wouldn't fit through the front door.  Then we realized that we could get it in the basement door but it wouldn't fit through the door at the top of the basement stairs.  So, like any desperate woman would do who wants her new kitchen- I ordered V to rip out the basement door, frame and all.  I didn't like it anyway. 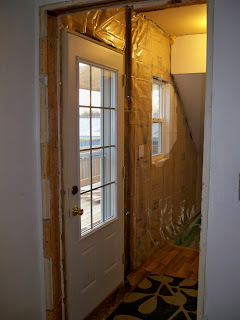 We still had to remove the door off the cabinet but we managed to haul it into the house, up the stairs and into place. And it is HEAVY!
Finally, I got started painting.  J16 and I used the laser level to get the chair rail line, and applied the painter's tape.  It was getting late so I only got the first coat of the bottom of the wall.  But it is beautiful. 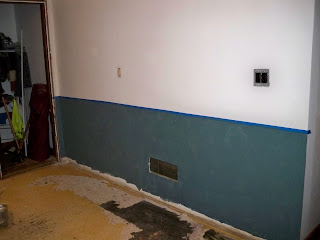 It is a sea blue/green textured paint (granite) with gold sparkles in it. The effect is subtle but fabulous.  Tomorrow morning, I will paint the second coat first thing and then start on the pale yellow that will go on the top. Tomorrow, we will also work on leveling and fastening in the base cabinets.  We will also bring in the counters.  They will need to warm up before we can install them.
But still, it's coming along.  And it's only been two days!
Posted by Judy T at 11:01 PM