From the scrap box

I had a lovely day off today.  V and I went out to lunch at the Bluebird Diner in town.  What a nice change of pace.  We also stapled some plastic up over the clean out door of the chicken coop since there was a bit more draft coming in there than I wanted (and it's right under the roost).  I collected 5 eggs today, fed and watered chickens and made some chicken stock.  But mostly, I played in the scrap box working on holiday gifts.
Um... for my sister Joyce- I know you're reading... you can either stop reading here or just tell me what color combination you would like ;-)   I take requests.
Two quilted and completed: 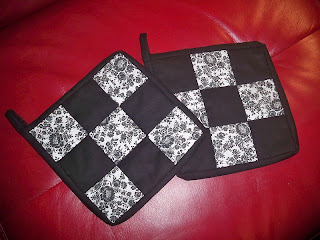 J17 says she wants some like those...
But mostly, some squares were made.  Some with vintage fabrics: 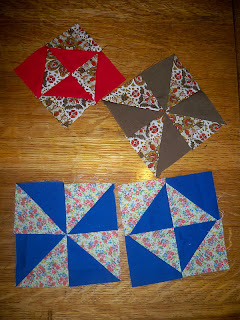 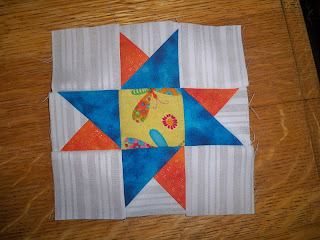 I do with I hadn't used the directional fabric for the white on white.  But, it will be fine. It will look better after it's trimmed up and finished.
I discovered another box of scrap bits, I think from Mom.  Some I recognize from dresses and shirts from my childhood.  Too much fun.
I've been having fun going through boxes.  Lots of this stuff still hasn't been unpacked since we moved and I need to get myself a bit more organized.
I'm doing some serious thinking about trying to find an outlet for selling some stuff if I can get myself going on making some stuff.  I found my book on Celtic Quilts for doing celtic knot work applique on a quilt.  I've only made one in the past (a table runner) that I gave as a gift (WHY didn't I keep it for myself!!??) but it was kind of fun.  Maybe some more of that will be coming up.  We'll see what happens this winter.
The garden is officially put to bed- I even did a preliminary tilling yesterday since I wanted to eliminate any spots for overwintering nasty bugs.  I'm also rethinking some of the master plan of the future but more on that as it comes together....