Wow!  I can't believe it's September already.  Where has the year gone!?  This first day of September saw me spending time in the garden.  The remnants of Isaac have us cooler temperatures and lots of clouds but only a few sprinkles (my parents got over an inch and a half just 78 miles away)  I've been working on removing the head high lambs quarters that seemed to spring up overnight around the edges of the garden (OK... and a few spots IN the garden!) while we were on vacation.  The deforestation went well and I drafted two energetic boys as my "debris management specialists" to haul everything to the compost pile.  I really, really want to get these before they go to seed or I'll just keep having trouble. I have had such an issue with weeds since we moved out here.  Since my garden spot is in the barnyard (which had been unused for over a year) the weed seed load is HUGE.  Every time I move any soil a hundred little weeds emerge. I thought about moving the garden but the soil is so, so lovely after years and years of manure where the rest of the property is clay.  I've been trying to mulch well but the weeds still seem to be an issue.  This year has been a little better so I hope I'm starting to get the upper hand.
I picked a whole bunch of tomatoes again while I was out there.  Some aren't fully ripe so I'll probably wait until the Monday holiday to can.  I also put together a goody box for our friend Jim.  He had bunny problems with his little garden this year and lost almost all of the plants I gave him.  So, I took him a whole bunch of peppers, some eggplant, a couple of tomatoes, a zucchini and 18 eggs.  He is definitely a foodie and was thrilled!  He was hospitalized last week with a kidney infection so was needing a little cheering up. 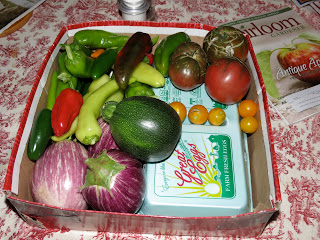 Doesn't that make a lovely get well present!
And another thing that I discovered today.  The White House released their beer recipes:  a Honey Ale and a Honey Porter (that they make with the honey from the White House bee hive! How cool is that?).  Hmm,  V and I have been talking about brewing.  Maybe this will inspire us to take the plunge.
I15 has to acolyte at church tomorrow but hopefully after he is done, we will head down to Old Threshers.  It rained there all afternoon today so we opted to not go today.  Also, today Justine had a visitor at Moore. V's mom went to visit her and to take Justine her stuff.  Justine says that the eggcrate mattress pad makes an incredible difference on her bed.  I also tucked in a jar of Gelatinous Yum (peach jam).  Hopefully she enjoys it.
Posted by Judy T at 8:07 PM