V finished the greenhouse last evening!  So, today, I got to play inside.
I was up early this morning since I15 had to be in town by 7am for parking lot clean up.  The City High Band works to clean up the parking lots around the stadium after home football games at the university.  They get paid for this and the money goes to fund all sorts of things like trips, uniforms, music, etc.  It is also part of their grade that the students 'volunteer' at least 4 times.  So, since it is still early in the year and warm(ish) and still light at 7am. I15 has been going to all the clean ups in September.  So far he has done 2 of his 4 games.  With lots of students there to help it generally takes less than 2 hours.  But wouldn't it be amazing if tailgaters cleaned up after themselves and the high school kids didn't need to pick up their garbage?!  What a concept!  But, then, the band would be out of money that they need and would have to do other fundraisers.
But, after clean up, I15 and I made a trip to one of the local garden centers and picked up 12 bags of topsoil.  They are selling it cheap since they want to clear it out so they don't have to store it over the winter- and I happened to want some for the greenhouse.
Behold! 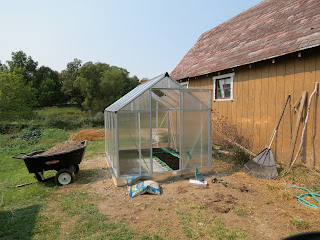 Here it is in all it's glory.  Well, I guess it's not that glorious... 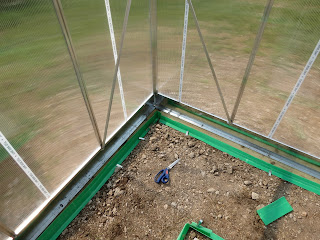 The frame came packed in this really cool box made of green corrugated plastic.  Which I cut and used to build little raised bed frames inside the greenhouse.  I love being able to repurpose stuff.  And I had some left over edging spikes from earlier this year that I could use to hold it in place.  After lunch, K12 helped me load in the topsoil. 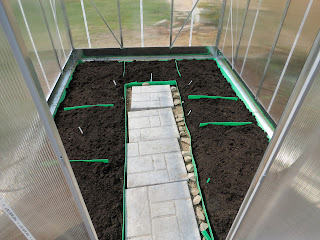 Filled with topsoil and planted:  Lettuce (2 kinds), spinach, chard, kale and radishes are all in!  The kale is mainly for the chickens.  While I like kale, I'm about the only one who does (except the chickens!).  We can't keep it in the regular garden over winter or the deer will eat it (at least they always have in the past). 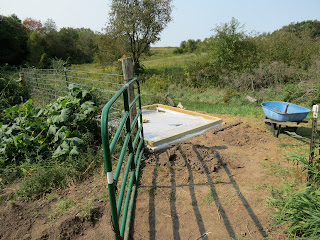 V has moved on to his next construction project.  The re-construction of the garden shed just to the north of the garden.  To the left side of the photo (behind the gate) you can see the Long Island cheese vine trying to take over the world.  It was over the fence but V tossed it back in.
It has been a busy weekend,  I'll almost be glad to get back to work tomorrow so I can get some rest, LOL!
Posted by Judy T at 3:20 PM