If I had any doubts about the end of the main season garden, they were erased with the dawn.  We a record low temp this morning and it was just barely above 29 degrees F when I got up this morning at 6:15.  Brrr!!  So, after that, the garden is officially done. It didn't matter if anything was covered, it was frozen.  I even had to wait for a clump of ice to clear the hose this morning when I went to water the chickens.  This is such odd weather.  We don't usually get temperatures like this until sometime in mid to late October. Global weirding strikes again.
I thought I'd share a few photos of my Manic Monday (and last night) 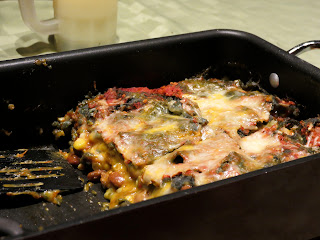 Last night's dinner- affectionately known as Zombie Smush.  It's really enchilada casserole made with blue corn tortillas.  It's built like lasagna: layers of tortillas, a mix of corn, chili beans & hamburger and cheese. With enchilada sauce poured over all.  (for a vegetarian version, just leave out the hamburger) 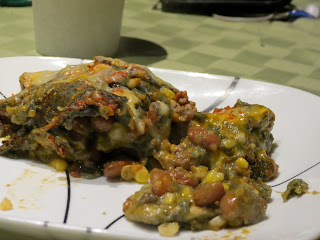 The blue corn tortillas make it totally gross looking but it tastes fabulous.  And the boys love to eat it. 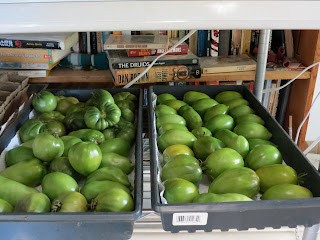 The tomatoes have come full circle.  I've got green tomatoes ripening on my seed starting racks, nestled in flats.  They end where they began.  Somehow fitting.
And what's a girl to do on her day off when she can't play in the garden and has TONS of salvaged peppers? 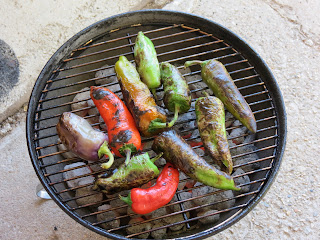 Make fire roasted peppers, of course!  After a frosty morning, it turned into a lovely day- a bit windy but not too bad. It was too windy to fire up the grill on the deck so I  worked in the little 'porch' under the deck by the back door.  Sheltered enough from the wind but still enough air circulation that I didn't get smoked out.
And... I'm sure that none of you, nor I, have any personal experience from our misspent youth to be able to answer this question but I'm going to ask it anyway:  Did you ever notice that chiles on the grill smell kind of like pot?  Just a thought.  Not that I know what it would smell like from college days......
The peppers got chopped and frozen into little recipe sized packages.  While I had the grill hot I also grilled a few eggplants.  One I had for lunch and the others I made into little single serving faux eggplant parmesan casseroles:  grilled eggplant layered with roasted peppers, cheese and tomato sauce.  I had one for my Meatless Monday tonight while the guys had spaghetti.  And I've got more tucked into the freezer for later.  Hmm, I've finally got a use for all those little pyrex dishes from college that I've been lugging around for 20 years.
And finally... 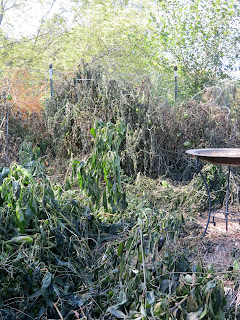 the pathetic end of the garden.  If the weather is nice, next weekend I'll probably pull everything except the broccoli, fennel and kale and put the garden to bed for the winter.  Of course, we probably have enough warm weather left that if I till now maybe a bunch of weeds will sprout only to get frozen off, Mwahahaha....

So, with the end of the garden season and only straggling tomatoes inside it looks like I'll be able to get started on quilting season early this year.