Early this morning I15 had to be at the stadium for parking lot cleanup.  He did his thing there and I got busy on my list for the day.  Since we had the band contest yesterday afternoon I didn't get as much done as I would have liked.  So, we were bad and ditched church.  So I did manage to get quite a few things done today.
V and I went clothes shopping this morning.  Let me tell you, he's not as much fun to shop with as Justine, but we got the job done. I have one department store credit card and that is at Kohl's.  Periodically they send out discounts where you get 15, 20, or 30% off your entire purchase.  This time around I happened to get a 30!  That's always the best time to shop.  I needed a couple new pair of pants for work and, since V was desperately in need of new work pants, he came along.  He has been really hard on his pants with all the construction in the past few years.  I even splurged and got myself a new outfit (pants, shirt and loose sweater/jacket) to wear at a conference I'm going to later in October.  I've been asked to participate in a panel discussion group at the state Occupational Therapy conference this year.  The featured presenter is quite well known (she used to be the president of AOTA!) and as she presents, she wants individuals representing the different practice areas to be available to discuss how what she is presenting is relevant to their practice.  I've been asked to represent all the OTs in Mental Health. EEEK!!  I'm a bit anxious about this one.  I do hope I can speak intelligently.
Anyway... back to today.  While we were over in that part of town, I wanted to stop at one of the local farm stores to pick up some new bedding for the chicken coop since it's about time for the fall clean out. While we were there, we got something that I never thought we would ever own.   We have been having such trouble with chipmunks this year.   I think the mild winter and early spring helped boost their population tremendously.  I don't want to resort to poison and they always seem to be able to outsmart the traps.  We have been joking about getting a pellet gun and picking them off from the deck.  Amazingly enough, V was serious- so today we purchased gun.  Well, an air rifle, so it's not a REAL gun.  But this is a huge step for V who vowed that we would never have a firearm in the house. 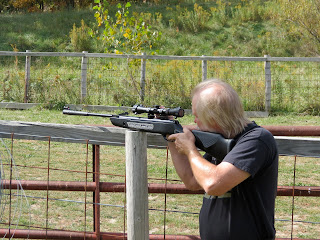 It even came with a scope for precision targeting, LOL!  V is going to have to do some more target practice before he takes on the chipmunks, though. 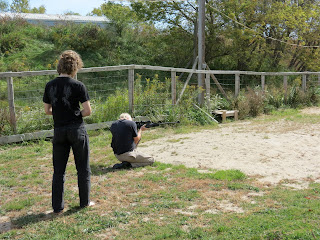 K12 came down to watch for a while.  Interestingly enough, neither boy is interested in firing it.  But, we had the firearm safety lecture anyway.  Even though this is just an air rifle it is still a weapon.
I've been saying since we moved out here that we should get a gun.  Being able to pick off a sickly wild animal at a distance is a good thing. Or to get a deer license and snag one of the deer who hang out in the meadow. But, V never been on board.  Maybe this is the gateway weapon, LOL!
After target practice I had hoped to spend some time clearing out the garden (the chicken coop is slated for next weekend) but instead I tackled the mass of ripening tomatoes on the kitchen counter.  I made a bit more enchilada sauce and some spaghetti sauce.  I've got enough enchilada sauce for dinner later this week and 2 batches for the freezer.  I've got spaghetti sauce for tomorrow night and another night that also went into the freezer.
I harvested some English and Orange Thyme to dry and did a bunch of laundry in addition to a few other usual weekend chores.  I still have not managed to get the deer netting around the plum tree,  get the tomatoes pulled from the garden or the garlic planted. I simply ran out of time.
Posted by Judy T at 8:10 PM