Oh My, I'm tired!  V even more so.  We worked HARD today.  He was out early with a rented 12 inch chop saw cutting through the concrete slab that covers the well.   He didn't have a good time.  Evidently when they poured it, rather than using re-bar, they used several steel fence posts as reinforcement.  But he got through most of it before he called it quits.  Now that there is access, the well guys can come in next week and bring the well up to code and shock it so we can finally drink the water.  Then comes the septic.
Me, this morning I dug raspberries and then transplanted them out at the new place.  12 black raspberries and 16 golden ones as well as a few bluebells.  Then I mowed the lawn, at least that immediately around the house- with our push mower that chose today to suddenly be not-self propelled.  Ugh!!! What a job.  The grass was about 10 inches in some places and still wet.  To make matters worse, the previous owners' dogs dug holes in the yard which are now hard to see until you either step into them or the mower gets stuck.  Not to mention that the yard needs some serious re-grading (which hopefully will happen when we replace the septic) because there is a wicked hill.
We had a few visitors today as well. First, our realtor stopped out to see how things were going.  I think really to get a feel on when we will be ready to out our house on the market.  V is speculating that he has someone lined up already and is just waiting for us to be ready to move out.
Then was the other surprise visitor.  V and I were taking a break to get a drink when an Iowa State Trooper pulled into the drive and got out of his car.  Lets just say that we were a bit nervous at first.  But, it turns out that he is one of our neighbors (one of the 3 houses we can see from our property) and was just stopping in to welcome us to the neighborhood.  It turns out that his MIL grew up in our house and is probably one of the kids from the family that originally built it.  Talk about a small world.
I did take a walk about to see what is blooming at the new house.  There were a few surprises that should be fun to see how they turn out. 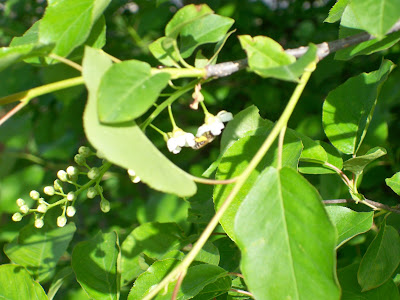 The wild cherries are just starting to open (there is a bee on the blossom- sorry for it being out of focus- the wind gusted just as I took the shot).  Wild cherries here are a 'weed' tree but still good for making wine. 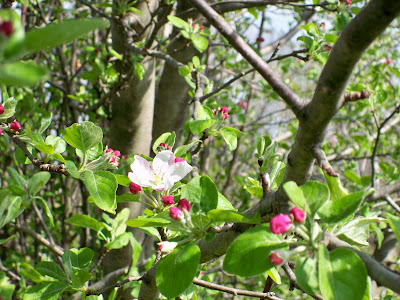 There is an apple tree beginning to bloom.  I have no idea if it will produce any fruit and it is in really bad shape- it looks like someone cut it off at the ground and it came up from the stump so there are lots of 'trunks' intertwined making it look more like a big shrub. 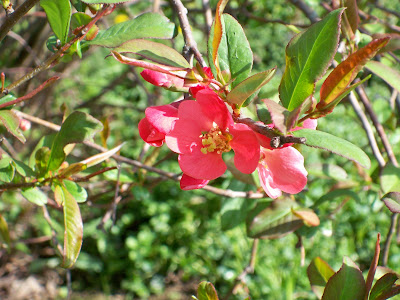 We also have an ornamental flowering quince- pretty flowers but not much else. 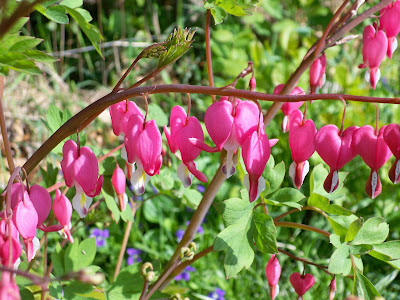 I know I already posted a picture of the Bleeding Hearts but they are just gorgeous. 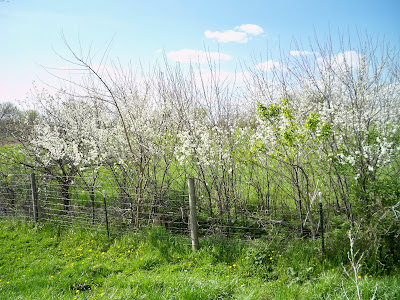 Just on the other side of the fence is a grove of wild plums in full bloom.  They smell heavenly!!!  Also, as I was planting the golden raspberries near the fence I discovered that there are wild raspberries across the fence as well as what looks like gooseberries.  Hopefully they are escaped cultivars since I know that wild ones tend to not produce as heavily.
I did get the rest of the garden tilled last night since Roger called and wanted his tiller Friday night so he can work his garden this weekend. It was a bit wetter than I would like because of all the recent rain but it wasn't too bad.  So tomorrow- I plant!!!
When we called it quits we finally went out and did our 'big ticket' ordering.  We have a lawn tractor that will be delivered on Tuesday and my new range and range hood will be delivered in about 2 weeks (they are both special order items).  Hopefully by that time, we will have the gas line run and the island constructed and ready to go in the kitchen.  We have realized that we won't get everything done that we wanted before we move in.  We at least need to have the kitchen remodel done and J14's room in the basement finished.  Everything else, we can finish when we're there.
In some other good news,  V had a call from his little brother- the one who is a co-owner of an energy company in Texas that he is doing freelance writing for.  Anyway, bigK and his partners evidently like the work V has been producing and want to give him more responsibilities/work and will double what they are paying him.  It could make things interesting with the timing of trying to get work done at the house.  Maybe we will need to get the cable hooked up at the house early since that is the only way we will get high speed internet access out there and we're not going back to dial up.  So, that is good news on the financial front, especially since the publishing company that V worked for previously will be closed for good on the 15th of this month so there will be no more copy editing jobs from them.
Now, off to watch a video with the children for a bit and then it's off to bed for me.  Tomorrow is another busy day.  I'm excited that I'm finally going to be putting things in the ground in my new garden!!!
Posted by Judy T at 9:05 PM

Labels: Gardening, House of the Future