I tried a couple of new to me heirloom tomatoes this year.  I thought I'd let you know what I think of them.
The new varieties are Ananas Noire (a dark pineapple tomato?) seen below on the left- anything but dark.  And the red beefsteak is a Crimson Cushion.  One I had never heard of before this year. 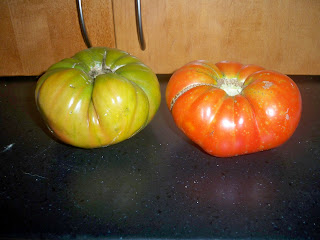 I gave up on my Mortgage Lifters that I have grown for years.  Two years in a row they were the first to get hit with blight.
But check out those sliced tomatoes.  Crimson cushion on the left now and the Ananas Noire on the right. 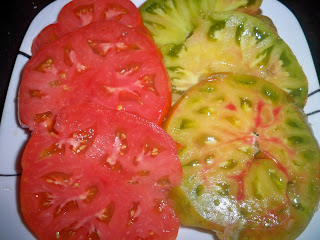 Isn't that one of the coolest tomatoes ever?  I had a hard time telling when they were ripe. 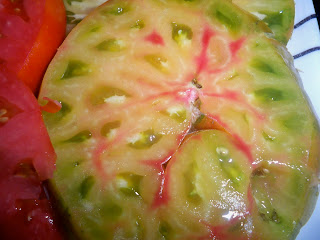 But, now for the taste test.  The Crimson cushion is a pretty standard red beefsteak tomato.  Nice, solid, not too many seeds, good flavor.  But, not a very high acid content for a red heirloom,  I expected much more tartness.
The Ananas Noire is also a nice solid tomato- the largest weighed in at 1.25 lbs. not too many seeds and a nice texture.  It is really low acid,  hardly any tang to it at all and, to my mind, not much flavor. It's really pretty and looks great layered with other colors on a plate but, personally, it's not a favorite.
My favorites, like last year, are the Black Krim.   My Amana Orange, another favorite, are huge but not ripening yet.  But, I have got a few... 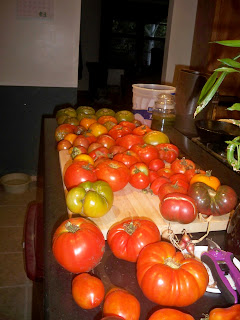 I'm actually canning tomatoes tonight!! Woo Hoo!!  I've got 10 pints of diced tomatoes in the canner right now and I've got a pot of sauce simmering on the stove.  It's going to be a late night but it feels so good to be finally getting to it!!
Posted by Judy T at 10:10 PM