Oh my, I'm tired.  And I don't even feel like I accomplished much.  Oh, I fed and watered chickens, did some dishes, did 5 loads of laundry and sorted and got some put away that has been languishing in baskets for the week.  I didn't do much laundry last weekend with guests in the house so there was a backlog.  I've still got some sheets and towels to wash tomorrow but I'm nearly caught up.
I also took J17 and K11 shopping this afternoon.  There were things they both discovered they needed (or things I forgot to check) before school started- such as sneakers that actually fit.  I also was informed by both boys the night before school started that they needed new backpacks.  Now, really, don't you think they could have told me that earlier when I asked what else they needed...  But at least things were on sale since school has already started.  That seemed to take all afternoon but it really only took a few hours.  Of course, there were a few other stops to make as well so we did a combined trip.
But I did want to share a few images of the day...
First, one of the morning glories we've got climbing up the side of the deck: 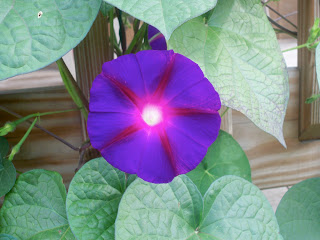 They're from Seed Saver's Exchange- I don't remember the name off hand (Grandpa Ott's??) but they are growing well in spite of getting planted late. 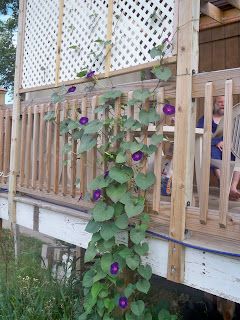 Both kiwi plants that we had planted for the pergola were dug up by some animal during the heat wave (chipmunks??- but I think something larger) and I didn't find them before they had dried out.  They really didn't seem to be doing well anyway so I'm not sure I want to replace them.  I'll have to think of something else.  Maybe I'll just keep the morning glories and add moon flowers.
And V's birthday present to himself: 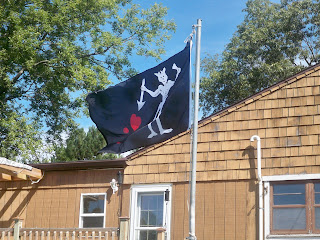 A replica of Blackbeard's flag!  We've had a 'traditional' pirate flag flying for a while but this one finally arrived- special order.  I'm sure people driving by on the highway will wonder even more about us!
The Surprise lilies are blooming. 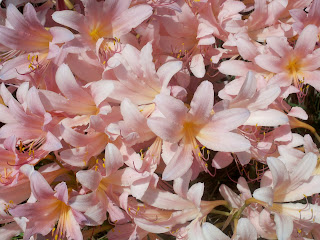 They have outdone themselves this year and the clumps of flowers are huge and fragrant.  I even cut a few to bring inside.
Finally, our latest outdoor addition: 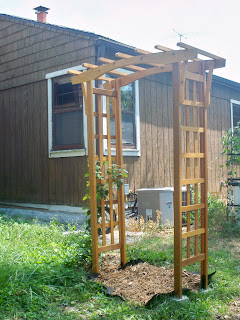 J17 and I built this a few weeks ago for a red climbing rose.   This will be the entrance to the Goth Garden.  We are planning a patio on the far side of this and a path will lead into the garden.  We've still got a long way to go but the structural pieces are taking shape.
One more day to the weekend.  I know it will be busy.
Posted by Judy T at 10:18 PM