Another week has come and gone.  My Oh My!  How the time flies!!  The week has been productive in some ways and not in others.  As you are probably aware, last weekend was kind of wasted with the plumbing project.  It took much, much longer than anticipated and threw a wrench into all kinds of plans for last weekend.  However, now we don't have a jumble of pipes and dead ends in the basement.  For those newer to here, the basement of our home used to be used as a vet clinic and many pipes were cut and capped when we removed the multiple sinks from the exam rooms in the basement.  We also now no longer have pipes hanging below the joists in the family room downstairs so we can finally put up a ceiling.  But, plumbing kept me from working on the baby quilt in progress and the lack of water interfered with other things like laundry.
But, on to Independence Days.  Here, I feel like I accomplished something.
Plant something- Planted two crowns of asparagus that J17 and I dug up at my parent's farm.  They were in places that they no longer want asparagus so they were glad to get them moved.  One is pretty small- probably a year or two old while the other is large and has pretty big stalks judging by the remains of last year's stalks.  Other than that, I planted a short row of spinach in the garden.  I noticed today that the first little seedling is up.  Woo Hoo!  Actual gardening in the ground has commenced for the year.
Harvest something-  34 eggs again this week.  Plus a little chickweed for our salads tonight... shhh.... don't tell.
Preserve something-umm- I can't think of anything.  Well, I added orange peels to the vinegar soaking for cleaning solution- if we use it to clean- it tastes pretty good!  I'm wondering how it would be in a marinade for shrimp....
Waste not- The usual: recycled, composted and scraps to the chickens.  V and I14 made a run to the recycling center with a load of cardboard boxes.
Want not- J17 and I stopped at Stringtown again on our way home last weekend.  I got a large package of semolina flour for making pasta.  I wasn't too thrilled with the frozen quiche we tried to use up extra eggs but I figure I can make and freeze pasta to use some eggs and the semolina flour will be perfect for that.  We also picked up some almonds and a huge package of dried apricots.... now if I can just keep J17 out of them!
Eat the food- we've been doing pretty well at eating out of the freezer and pantry this week.  It was kind of nice to stop at the store for milk and look at each other and say "Do we really need anything else??" and be able to answer NO.
Build community food systems- eggs to work and with Roger. Delivered seeds to Mom and came home with a few myself.  Supported the local Amish food store and got cheese and curds at the cheese factory
Skill up- Hmm... have nearly perfected the sourdough crackers.  Made pasta- which I haven't done for a while.  But unhappy with my attempt at whole wheat sourdough.  I need to work more on that.
And finally- with the unseasonably warm temperatures around here, the trees have been exploding into life: 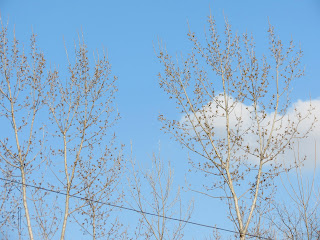 Just look at those buds!