It has been a day of many, many things.  First, it was my last day of vacation.  Nevertheless, I had to go in to work for a few hours to help out.  Well, I didn't HAVE to go but they were shorthanded and swamped.  So, I took the risk to leave my MIL home alone for a few hours with a few tasks that were fairly harmless (sorting socks and re-organizing my linen closet).
V got home at lunchtime, just before I got home from work (I worked 9-1).  It is SO, SO nice to have him home. He went on a winery tour with one of his sisters while he was in PA and got me a present: 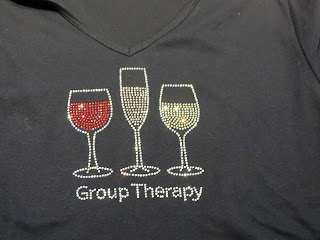 Isn't that a hoot! Especially since I run therapy groups.  Of course, I don't think I'll be wearing this one to work- and not because the design is in little rhinestones.
The bad news is that V's mom found out that her car now won't be ready until THURSDAY! Last week they told her it would be done tomorrow.  So she is here for a few more days.  At least V is home.

But now for the OMG news!!!  I am so, so psyched about this.  Late Saturday night I was perusing Craigslist and stumbled across something that made my heart skip a beat.  I contacted the seller and was the first caller.  The transaction was made this afternoon.
Here she is-  I have yet to name her 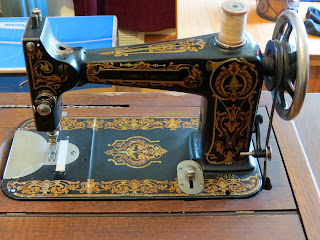 This is a Damascus Rotary Treadle sewing machine. 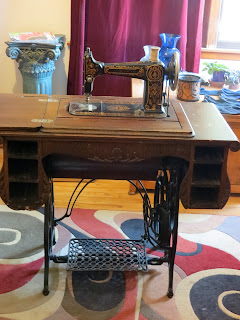 They were sold by Montgomery Ward (primarily, although evidently other department stores also carried these or similar ones), manufactured by the National Sewing Machine Company in Illinois. (oops, I took the photo before I had the drawers back in- I must have been impatient) 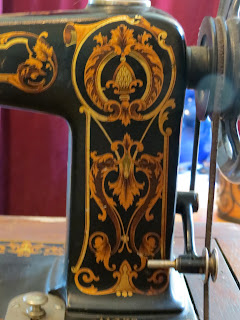 I've been trying to find out information about this particular model but have been having no luck. 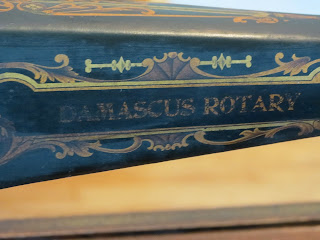 Everything I can find is about machines that are labeled simply Damascus or Damascus Grand (the top of the line model).  This one doesn't seem to have any information out there about it. 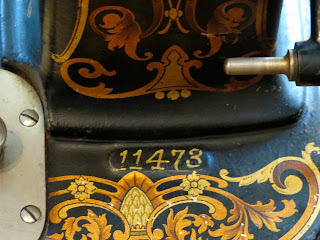 I do have the serial number but there evidently aren't any records from the company that are available.  sigh...   If anyone can give me information or point me to a spot I may have missed I'd appreciate it.
This machine was being sold by a young woman who inherited it from her great-grandmother but is moving and doesn't have room for it.  It came complete with an entire drawer of attachments (evidently a $.75 value in the 20's) and the instruction manual (sadly missing the cover and hence, the date).  But it is in working order.  The only thing I'm missing are needles.  I'll have to do some more research to find out about those.
I have wanted a treadle machine for a long time and every time I have previously tried to get one I was too late.  Mom has an old treadle machine and I remember using it as a child when all three of us girls were trying to finish 4-H projects at the same time.  Whoever only had to straight stitch used the treadle machine.
And, yes, I know... I was fiscally irresponsible.  I spent $150 on this machine that could have well gone to other things.  But I'm so, so, so excited about it.  It is absolutely beautiful.  Now I guess I have to let V get some trains when we go to Old Thresher's in a couple of weeks.  Turn about is fair play.  But even he thinks it's a pretty cool machine.
And now I can sew if the power goes out- and get some exercise at the same time.  In my research I stumbled across several accounts of quilters who try a treadle machine and never to back.  We'll see.....
Posted by Judy T at 7:51 PM