In my manic Monday off, I was on a quest for needles.  My new, old treadle sewing machine came without any needles.  I've been doing some research and found that I, amazingly enough, had a needle that was reported to work.  It didn't.   Evidently all the standard needles are too short and I couldn't get it to take up the bobbin thread.  I tried to lower the needle but by the time I got it low enough there wasn't enough of the needle shank left in place to keep the needle steady.  I made a run to a local sewing machine shop because I know they have a guy who will actually service old treadle machines.  Of course he wasn't in and the guy there just wanted to run google searches (which I have already done exhaustively!) and wasn't helpful in finding the kind of needles I need to try.  I have found somewhere online that sells them but I may see if I will have time to run to a few of the quilt shops in Kalona to see if they have any ideas.  I would guess that with their huge Amish/Mennonite population that there are still treadle machines in use in the area.  But that trip won't happen any time soon.  Work beckons tomorrow and for the rest of the week.
We did have a lovely rain yesterday (1.2 inches!!) and this morning it was pea-soup thick fog out there. That interfered with my gardening plans so I just had to stay inside to sew.  Oh the hardship...  I got started on the quilting for Justine's Steampunk Airship quilt and I'm pretty happy with how it is turning out. 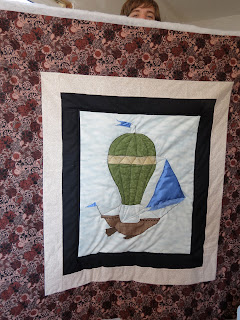 I did manage to pick tomatoes this afternoon and made a killer pasta sauce for dinner.  Sh... don't tell the boys that there was also zucchini in the sauce...
And now, for some reason, Mandy is attempting to crawl into my backpack.  Crazy cat.  She does the strangest things sometimes.  Ah, and now she is attacking my pincushion.  Hmm....  I think it is kitty wacky hour.  A little entertainment is always fun.
Posted by Judy T at 9:43 PM