Then and Now- Part 1

There's a mouse in the house...
Well, there were.  Lots and lots of mice.  Many of you know that when we bought this house, it had 'issues'.  Many, many issues.  Not the least was the mouse infestation.  The property had been a combination home and vet clinic for about 10 years before we bought it.  The couple who owned it poured so much money into their business that the house had been sorely neglected.  And the neglect obviously goes back further than just those owners.  The house was in really rough shape- and parts of it still are.
When we purchased the property, the house had been vacant for over a year and the mice had made themselves quite comfortable.  The vet clinic had obviously had a mouse problem, evidenced by the 'mouse proof' room where they stored feed (rather than try to solve the problem they pop-riveted sheet metal on the inside of the closet) and the numerous 'stick up' air fresheners near the dark room (aka Mouse Central Station- more on that another day.  I think I have PTSD from that)
The house was not liveable when we closed.  In fact, it took until July before we could even move in and even then it was touch and go.  Part of the fine print of our mortgage agreement was that the property had to be our primary residence within three months of closing.  So we had to get to work quickly.
One of the first things we did after we closed was to entirely gut the basement. 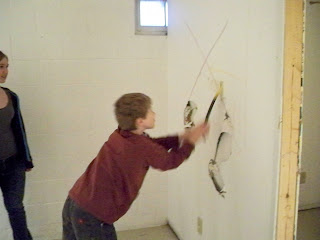 The children had fun demolishing the walls. 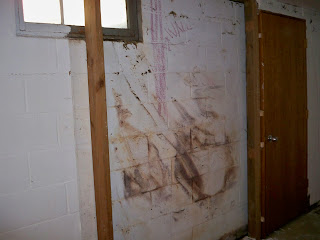 Above is some of the ugly evidence.  You can see the track of the tunnel and nest area that was in the insulation in the wall.  ICK!!
We geared up with masks and gloves- and sometimes even gowned for protection: 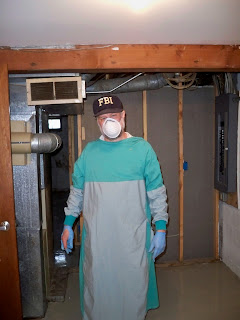 At this point V said he felt violated because of the sheer amount of mouse feces everywhere. 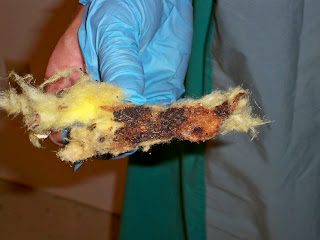 There were places it had soaked into the insulation.  ICK, ICK, ICK!!
We have worked long and hard at sealing up all the places we could find that they were getting in.  This is a prime example: 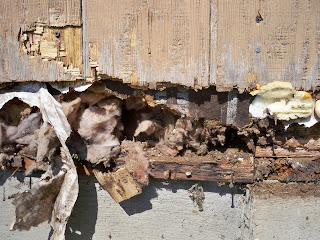 This was what was left of the mudsill behind the deck when we removed it.  It was a bit like the mouse equivalent of an expressway.
In the past year, we have had only three mice in the house.  Thankfully cornered and/or dispatched by the cats.  So, one challenge down, many more to come.
Tomorrow, I'll take you top to bottom of the house for more adventures.
Posted by Judy T at 6:16 PM