Then and Now- Part 6

More of the great outdoors
During the warm weather months, we tend to spend a lot of time outside.  While house renovations have taken priority over the past two years, we have also been working on things outside to make life easier or more enjoyable.  We have built bridges over several of the creeks. 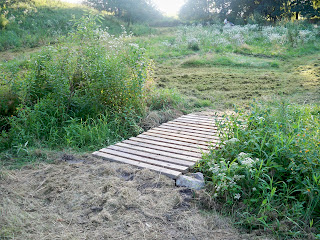 At least two of the four creeks are spring fed, at least we think so.  The summers have been so wet that we haven't seen things dry out but the fact that there is flowing water even in the depths of winter when everything else is frozen, tells me that water is flowing continuously from underground.
We ripped the rotting deck off the South side of the house.  Whoever in the past thought it was good to build a solid concrete block base for the deck and then vent both the dryer and the bathroom fan underneath it obviously wasn't thinking too clearly about condensation and rot... 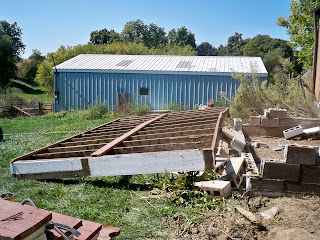 In the place of the old deck, we built a new deck with a pergola.  I planted hardy kiwi vines that will eventually provide some shade to the south deck. 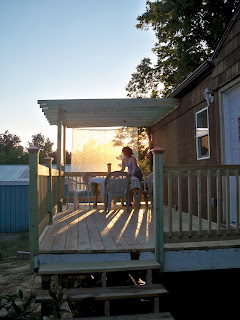 The current deck is only phase 1.  We hope to extend the deck around the back of the house this year to provide more outside living space. We also have several patio living spaces planned in 'the master plan'.
Over the past two years, we have weathered storms: 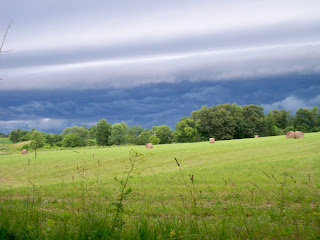 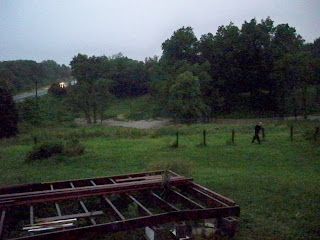 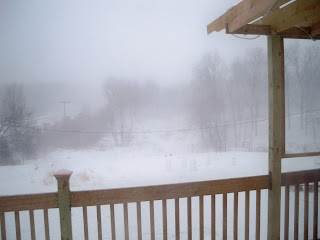 The weather hasn't always been kind but it is home...

Tomorrow, I'll let you in on some of our future plans...
And don't forget, it's not too late to enter the giveaway.  I've got goodies for two lucky winners to celebrate our two years here on our little piece of heaven.
Posted by Judy T at 8:03 PM