Then and Now- Part 3

The BIG projects
For a significant discount, we purchased our property 'as is'.  We knew there were issues with it and that the previous owners weren't interested in fixing them.  Two of the known issues were key talking points.  Both the well and septic failed inspection.  The well water was 'bacterially unsafe for human consumption' and the septic tank was an ancient concrete block affair that was not-so-slowly crumbling in on itself.  They couldn't deny us occupancy because of the septic but the well- well, I was unwilling to live in a house where the water isn't safe to drink.
The biggest problem with the well was that it was a 'pit well'.  Yup, the well head was in a shallow pit outside the house with a slab over it.  There was a hole through the basement wall into the well room: 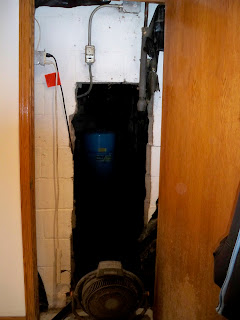 The previous owners had put a door over it to cover it up from their clients.  But, the 'roof' leaked, necessitating a sump pump in there and it was also another major entry point for mice as well as letting in a ton of cold air.  But, extending the well head to bring it up to code was beyond our abilities, so we called in professionals.  Oh, to save money we did a lot of the work ourselves but they moved the pressure tank inside for us and did the work on the well. 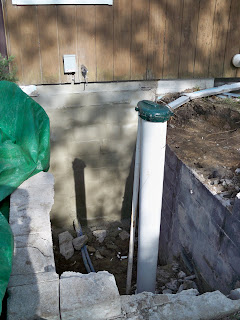 The pit, however, we filled in ourselves.  V had to install new blocks in the basement wall to seal the hole and then we spent forever (or at least it seemed like it!) filling in the pit.  The bottom is filled with rubble from the pit walls and then we did lots of manual labor moving dirt to fill the rest.  We leveled off the hillside where the pit is and used that dirt for fill.  That now-flat area will become a patio and is nearby J16's goth garden.
The septic was a whole other matter.  The well was imperative so we pinched pennies to make that happen (actually, we took out a home equity loan on our old house!) but we knew we couldn't afford the new septic system until we sold our old house.  Unfortunately, our house went on the market just as the housing market tanked so it took us a while to sell.  But last summer, after about a year of living here, the ground opened up.... 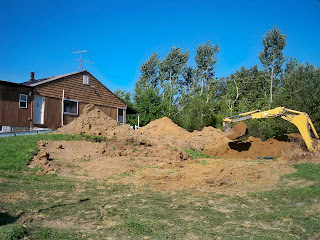 And we had a huge muddy mess. The South yard still hasn't recovered.  We still have a 'reserve' pile of dirt that they left us and it's a good thing- the septic tank settled tremendously over the winter and now we will have to backfill  areas where there is about a foot difference between the tank and the surrounding soil.  But, we knew it was coming.  Now that the heavy earth moving equipment is through, I can start on my plans for the herb/flower garden that will be in the spot in the foreground of the picture above.

People have asked me in the past how we have been able to afford to make all these repairs.  We were fortunate enough to have fully paid off our previous home in town so didn't have a mortgage there.  We did take out a home equity loan that gave us a 'cushion'  for repairing the well and purchasing materials -which we promptly paid off as soon as we sold the house in town.  Then, a portion of the money from the house sale has been put into savings for the rest of the projects. We are careful about how we spend our money, making purchases in advance, when possible, when supplies are on sale and storing them in the outbuildings.  But mostly, we have saved a TON of money by doing the majority of the work ourselves.  I'm so fortunate that V is a jack of all trades and has the skills needed.  We have all learned lots and it has been a great family project with the children working with us to achieve all this.  I'm still waiting for at least one room in the house to be COMPLETELY DONE.  But, I can live with the chaos because it is all part of my dream.
Tomorrow I'll finish up with the house stuff before we move to the outdoors and what has happened out there.  Not as much as I would like has happened outside as we're trying to get the house more livable first but things are progressing....
Posted by Judy T at 9:43 AM