My dearest, most darling, sweetest, amazing husband finished the door for me today while I was at work!  Isn't he just the best!!!
So....  Tonight after work, J17 and I put down bedding
Check out the new screen door in the inside.. 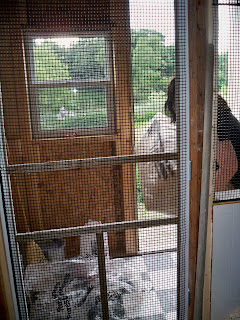 And we took the chickens outside!!
Below- Claudia checks out the roost. 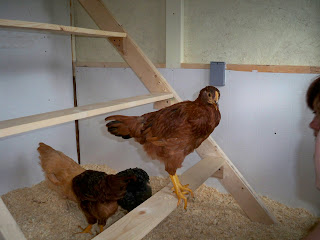 The big girls came out first.  After a few minutes for them to adjust, we brought the little ones out to join them.  I guess the little ones aren't THAT little any more.  They are 6 weeks old already 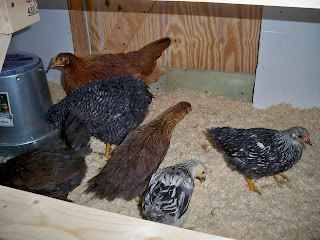 Since they have been living in the kennel condo in the basement, they are already acquainted with each other.  We have been letting them out together for short periods over the last week or so to get them accustomed to each other.  There was a little pecking but not that much.  We thought about bringing the kennel into the coop and having the little ones in there for a while but they seem to be doing pretty well together so we're going to risk it.  I'm hoping that since it is a new space for all of them that no one will feel the need to defend their territory.
They seem to be mingling pretty well... 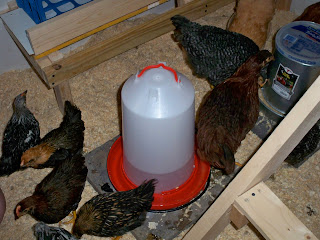 Below, Magnus, our rooster has discovered the log we placed in there for entertainment. 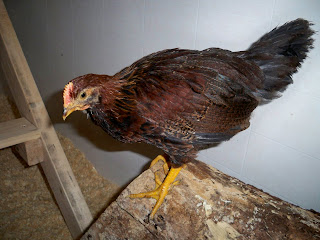 He's a Welsummer- isn't he handsome??

Now, I've still got to clean up the downstairs bathroom.  It will be SO nice to have that back!!   There is something unnerving about getting out of the showers with all these chickens watching you- like they're asking "Where are your feathers?!"

Now... to build a run so we can let them outside.  But, I think they're going to be adjusting to life in the coop for a few days.
Posted by Judy T at 7:32 PM