I am so, so, so close to being finished with the coop.  I finally got my camera charged so I thought I'd share a few photos.
Here is the North side of the coop with the clean out door: 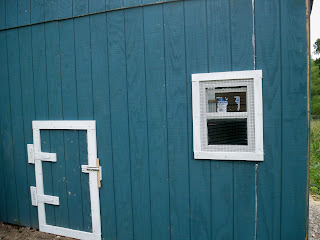 The South/West sides- chicken door to the far right under the window. 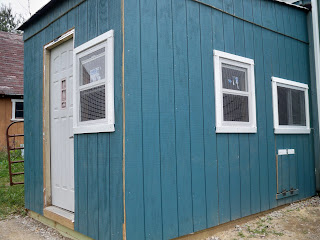 I still need to finish the exterior door trim and the corners.
And now for some inside shots.
The roost is over partially over the clean out door 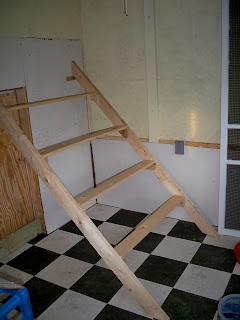 Don't you just love the vinyl remnant on the floor- it's almost too bad we'll be covering it up with bedding. You can just see in the above pic where the feeder and waterer are positioned.  The chicken door is directly in front of the roost.
And finally, the nest boxes: 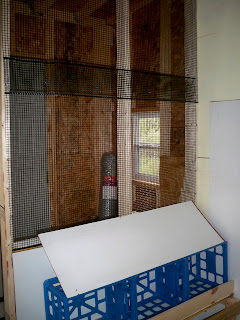 There is a half wall behind the nest boxes with hardware screening above.  To the left is the door to the storage portion of the coop.  The only thing left to do is the screen door between the two sections.  Then it's time to put in the bedding and the chickens.
But now, something different!  A harvest!!! 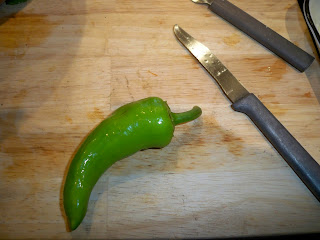 The first pepper!  It actually came from a plant labeled "yellow bell" but doesn't look like a bell. It did taste like one, though, so I'm thinking it's just a mutant shape.  The other little pepper set on looks more normal.
And strawberries!! 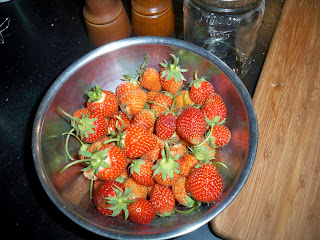 Mmmm... I made a strawberry rhubarb sauce this evening.  We don't have rhubarb of our own but yesterday Jim gave me some.  He gets produce from a CSA and they gave him rhubarb- which he doesn't like- but we do!!

I hope to have more progress to report tomorrow.  Maybe even about chickens!!
Posted by Judy T at 9:27 PM