Red currant, that is.  Ha! You thought I misspelled.  I do that on occasion, but not this time! 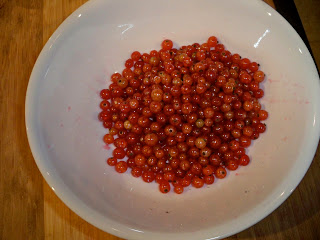 I picked the currants this evening.  6.7 ounces or just shy of 1.5 cups.  Not too bad.  The bush I planted this spring, while huge, didn't produce.  Not surprising.  But the two year old bushes- the two I planted shortly after we moved in were loaded.  I'm excited to see what they produce in the future.  It will just keep getting better and better. Maybe someday soon I'll have enough to make currant jelly.  Mmmmmm......
But tonight, I just made some sauce.  I know many people don't like the seeds and strain the juice but I really don't mind them- they are kind of like gooseberries.  The sauce is setting up nice and thick and I think we'll use it as a jam over the next few days.  I'm definitely seeing some cream cheese and currant 'jam' on my toast for breakfast.
Now, I'm off to read the article in the new edition of National Geographic on "How heirloom seeds can feed the world".  It's called Food Ark.  Let's see if I can stay awake long enough to read it ;)
Posted by Judy T at 9:39 PM