Today was day 1 of my staycation.  I didn't get quite everything on my list accomplished.  I slept in this morning, not getting up til 8.  So I didn't get an early start outside and it got hot quickly today.  I did manage to get the peppers weeded in the garden.  I also got the goth garden weeded and edged with the push mower.  I was impressed- the push mower hasn't been started in over a year but it started on the first pull of the cord.  I got too hot to do much else outside though.  Don't worry.  I did take a break mid morning.  The boys and I watched the final launch of the space shuttle.
I made jam this afternoon.  I was just shy of enough black raspberries so I added a few blueberries from the freezer- the last of last year's storage. 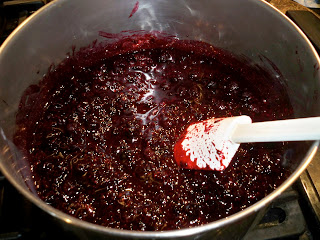 Yummy jam!  But, in  response to Erin's challenge.  Here is my mess! 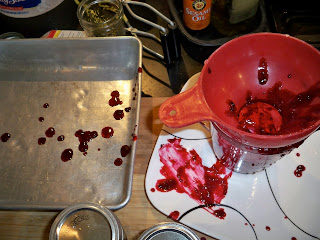 She noticed that we all tend to show our lovely jars and finished products but don't show the mess that goes into it.
I also had another preservation project this afternoon: 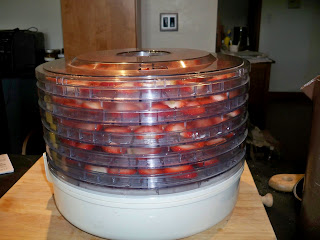 I'm trying dehydrating strawberries, at K11's request.  A local store had a great deal on strawberries so while I was out getting more sugar (I didn't have 7 cups to make jam!) I picked up some.   I've dried lots of things but not strawberries.
And another first: 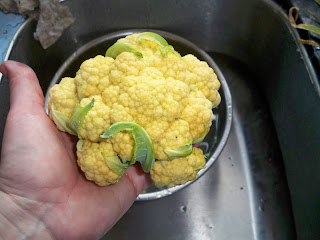 The first cauliflower.   A yellow one.  It wasn't very big but it was good.  We had it for dinner, stir fried with the last of the broccoli and a carrot.  Mmm...
I did try to do a little more work outside before dinner.  It was really steamy outside- still mid 80s.  I was going to mulch the goth garden.  While I was out there a robin was scolding me most viciously.  Then I noticed that a baby robin was hiding in the grass nearby.  So, I decided to knock off until they got it safely away.  There is always tomorrow to mulch.
Posted by Judy T at 11:46 PM