The heat has begun taking it's toll on the garden.  I did water last night.  Amazingly, the tomatoes and peppers look good.  The vining plants are another story.  My poor cucumbers were looking quite droopy when I got home this afternoon.  So, I broke out the poor man's drip irrigation system. 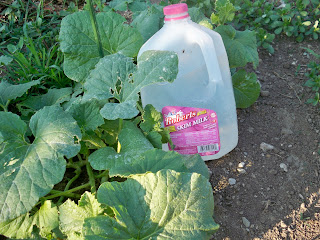 A gallon jug, filled with water with a single pin hole in a bottom corner.  Loosen the top a bit and you get an exquisitely slow stream of water.   Fortunately, we had forgotten to put out the recycling last week and still had some gallon jugs.  I'll have to refill them tomorrow but this should hold the vines nicely.  If things continue to be bad, I guess we'll just have to drink lots of milk and OJ and put jugs by each tomato as well.
The heat has been tremendous and the humidity unbearable.  Even now, at 9 pm, it is 87 degrees with 75% humidity.  ACK!  But, another thing I forgot to mention about the weekend.  V and the boys got the pool set up.  After a few days in this heat, the water is warm and wonderful.  A quick dip after deploying the water jugs was welcome.
The poor chickens are hanging in there.  I just wish it would cool down a bit more at night so the coop would cool off.  We're making sure they have plenty of water and they seem to be doing well but it is so sad to see them panting, wings slightly outspread in the heat.  K11 suggested we bring them back in the house... umm, I don't think so.
I hope everyone affected by the heat is staying cool and safe.  It's dangerous out there.
Posted by Judy T at 9:33 PM