What a day. We managed to get the construction stuff done today. We managed to get finished in about 5 hours, not too bad considering we had to add two new support posts and swap out a section of one of the support girders since there was a splice in the beam on top of the post we were removing. Fortunately, we have less than a 12 foot span so we are still within code and were able to jack up the floor, put in the new posts and swap out the beam. The house is still standing and we all still have all our fingers and toes so I consider it a success. Now construction can begin in earnest on "the rumpus room". 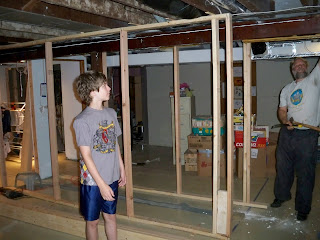 Before...
with partial support system in place. We added extra 4x4 beams with jack posts. 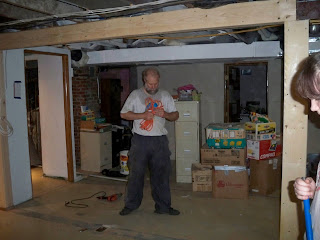 and after. New girder and posts in place.
I didn't have much chance to get any gardening stuff done today, but it's just as well- it was raining off and on all day. I also didn't get the other errands done that I wanted to accomplish. But this is a huge accomplishment that needed done before any other construction in the basement could be done... and, yes, as you can see, we still have many things in boxes (lots of books) a year later. Construction has taken MUCH longer than anticipated. I suppose that if we haven't needed them in a year, I could just get rid of them... but then, there are things that I know are somewhere in a box...... so we've just done without until we find it. All of my sewing/quilting and crafting stuff is still boxed until I have my sewing/guest room to unpack. But soon, I hope- My MIL is planning to visit in August so V's goal is to have that room complete by the time she visits.
But, it's Monday- the day I typically do my IDC update. So, here goes...
1. Plant something- just our new pear tree. J16 and I stopped at a local nursery this afternoon to pick up tree guards to put around the trunks of all our new little trees before fall to keep critters from snacking on the bark this winter. Now to just figure out how to keep the deer away and we'll be set!
2. Harvest something- cabbage, broccoli, carrots, beets, a few herbs and our first three cherry tomatoes! Oh, and a few fresh herbs as well.
3. Preserve something- dried a few herbs, not much else but I'm going to have to figure out something for all this cabbage.
4. Waste not- hmm, not much unusual here.
5. Want not- stocked up on sugar since we were out! I'm not sure how that happened but I ended up sweetening the bread I baked on Friday with honey since I discovered that we were out. I guess I also count the pear tree in the "want not" category since it will produce fruit for years to come.
6. Build community food systems- J16 and I stopped in the parking lot of K-Mart late this afternoon to get melon and tomatoes from two women selling from their pick up truck. Total impulse buy, but after an afternoon of construction a treat seemed in store. The lady we bought from said that this was their first picking. The tomatoes definitely weren't heirloom but they were tasty on our salads for dinner. We haven't cut into the melon yet but it smells heavenly.
7. Eat the food- hmm, we've had grassfed beef, local brats, sweet corn from Missouri (local enough!), salads from the garden and local bourbon and fresh mint for our mint juleps! Mmm, tasty... Mint juleps on 4th of July has long been a tradition for us- started many years ago in our college days using mint from our backyard of our rental house before we were married (gasp). It only takes one!!
It's another week. Our new therapist starts tomorrow so, for the first time in about 8 months we will be fully staffed at work! I'll hardly know what to do! If the weather cooperates, I'll FINALLY get my old broccoli pulled. The cucumbers are vining and the tomatoes are getting huge. Summer is here. Have a great one.
Posted by Judy T at 8:25 PM