It was a long day today. The funeral was lovely and it was a beautiful day outside. My brother was there and my sister from DC drove out. She was already planning to come this week but came a few days early. We had cousins from all over and there was much laughter. I think everyone had already done much of their grieving before his death since for the past few years he hasn't been himself- the past few months especially.
After we left the church, we spent a little time at my parents' home. We had some good and interesting conversation and I was able to pick my father's brain a bit about how he feels about GMOs. I was very pleased that, as a long-time conventional farmer, he is opposed to the GMO crops and the tactics of Monsanto. I also learned that my sister in DC has been able to get a plot in their new community garden and has been gardening this year. YEAH!! This is the sister who has been furthest removed from the farm for the longest and has never had a garden of her own before.
Also fun was the fact that, FINALLY, I could take produce to my parents. There is a long history of them loading us down with produce every time we would visit. Generally it was a very welcome gift but for the first time ever, my garden is producing where theirs isn't. They have had even more rain than we have and the garden is suffering. So, I could take them some goodies. An eggplant and a few peppers, not much- but still something.
But, it is Monday and this is when I usually do my weekly update. So here goes:
1. Plant something- nope.
2. Harvest something- tomatoes, hot peppers, eggplant, cabbage, cucumbers and basil. 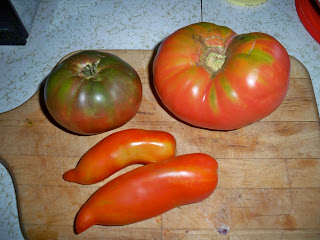 Black Sea Man, Mortgage Lifter and the first Polish Linguisa
3. Preserve something- froze some blueberries, not much else. But the tomatoes are starting to come fast and furious- I may have to can soon.
4. Waste not- We had one of our van tires patched today in my home town. Up here, the tire shops only want to sell you a new tire but this tire still had lots of tread (we picked up a nail). When we were down yesterday, we mentioned that we needed to get the tire fixed before our trip next week and Dad recommended the tire shop in town since they had patched a nail hole in one of their tires and had done a great job for a reasonable price. So, we loaded the tire up in the trunk of the car and dropped the tire off before the funeral this morning. We picked it up afterward. Only in a small town would this happen- but they didn't want our name or anything when we dropped it off. We told them we were in town for a funeral - they said they knew where we would be and that we would be back. Isn't that great. Other than that, we just did the usual stuff.
5. Want not- I stocked up on probably 20 lbs of flour and sugar at the grocery store this week. The sale ends tomorrow night so I may go hit the coupon specials one more time before it ends- if only to get more blueberries.
6. Community food systems- Hmm, I'm not sure if this counts but Mom and I were talking my sister through the process of canning tomatoes since her garden is doing really well. She hasn't canned anything since she left home (probably 30 years ago). But she did say that they loved all the home canned goods I gave them for the holidays (peach salsa, cranberry mustard and pear chutney) so maybe she will decide to be adventurous. Oh, and we also had some local sweet corn. Yum.
7. Eat the food- the featured meal of the week: 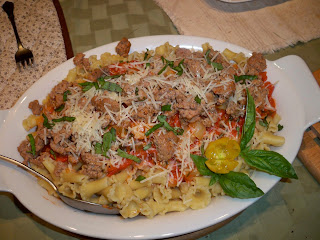 Pasta with sauce from fresh tomatoes, paprika peppers, onions and basil from the garden
A little turkey sausage and some parmesan cheese. Mmmm
Now, I only have three days to work this week and then I'm off for 10 days. We will have a mini vacation in Missouri but most of the time will be at home. Ahhhh... time to get things done.
Posted by Judy T at 8:07 PM