Whoosh!  What a start to the week!  I'm all atwitter with excitement!!   There is so much going on I can hardly stand it.
First, last night, I got to spend time here: 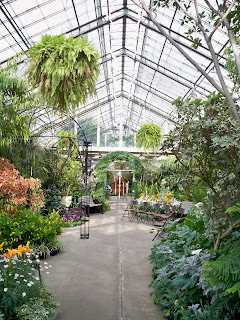 The Conservatory at Vanderveer Park in Davenport.  It is a beautiful place. I WANT one of these.
But the reason I was there was this: 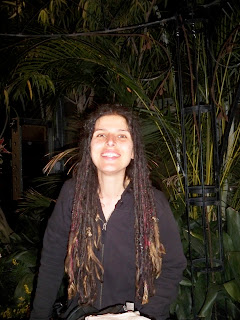 Zan Asha was there teaching a fabulous class on organic beekeeping.  I had fun meeting people that I had only 'met' online through their blogs.  Zan and Cathy of Miss Effie's Flowers who was the organizer of this class.  Now I'm super excited to get bees next year.  I can't wait to see them buzzing around the wildflowers in the meadow.
Then, the excitement continued today with this arrival: 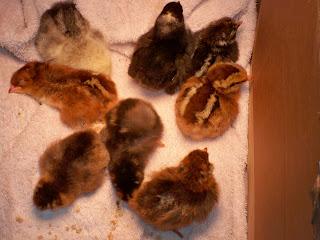 Aren't they adorable?!!  We have all eight of our new chicks:
2 Ameraucanas 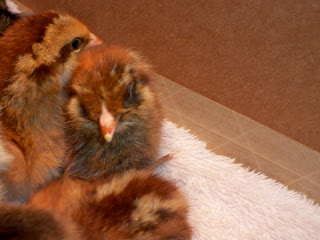 See the cute little muff on her chin?
We also have 2 Welsummers (one female, one male- hopefully our only rooster!)
Three Wyandottes: one gold laced, one silver laced and one columbian
And lastly another Barred Rock. I was amazed how fast they arrived considering that they had a May 2 hatch date.  And, I've just got to go on record that our postal carrier is the best one on the planet.  He called V this morning to make sure he would be home and drove them out to us so V didn't have to drive into town to the post office.  Isn't that just the best thing ever!  But now I feel guilty that V had to deal with getting them into the brooder.  I promised him that he wouldn't have to mess with them.  And I made him check their butts as well.  Poor guy.  But he survived.
The children (mostly J16) have been picking names for them.  K11 named one of the ameraucanas Captain Georgina- or Georgie for short.  She is the mean one of the bunch, pecking at the others.  Maybe because someone pooped on her back in transit.
We're fortunate that we have a divider for the dog kennel that we're using as a brooder, and that it has two doors.  So, we have big and little spaces: 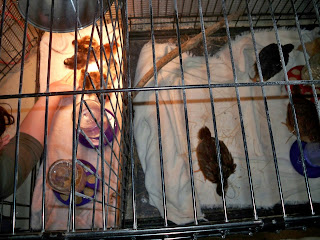 And tomorrow, all the lumber for the coop will be delivered and construction will begin.  Woo Hoo!  I've got the rest of the week off so guess what I will be doing.....  We need to get those big girls moved out before the little ones outgrow their tiny space.  Tomorrow, I will work on clearing ground and digging the trench for the foundation. Wish me luck that the weather holds.
And speaking of weather, my thermometer on the porch read 29 degrees this morning.  That's just WRONG for May.  And we have a freeze warning out for tonight with near record low temps.  My dining room table is now full of little tomato and pepper plants.  sigh....
Posted by Judy T at 8:37 PM