We had a severe storm overnight.  No damage (except one of my little tomatoes on the porch got hit by a flying trash can).  Today has been variably overcast but we knew the storms were coming again.
The boys and I were out working on the north side of the chicken coop.  We were just finishing putting up the second sheet of OSB sheathing, knowing the sky had been darkening, when we heard the tornado sirens wailing.  Right now, we're looking down the barrel of a storm heading directly for us.   There are unconfirmed reports of at least one tornado from this.  We'll be taking shelter soon.
I'll be sure to keep you updated.

Update at just after 4 pm. 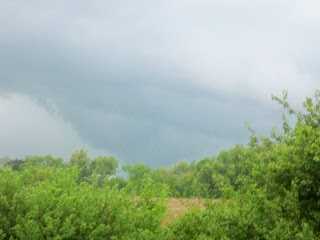 The worst of the storms have slid just to the northwest of us.  But only by a few miles.  In fact we're wondering if the above picture is a rain wrapped tornado just to the north of us.  We heard reports of a tornado on the ground crossing a highway just northwest of us moving east.  It looked much more impressive in real life.
We're not totally out of the woods yet since there are still a few dangerous cells on the way.  But the worst seems to have spared us.

Update about 6pm.
There are no reports of damage...  At least not that I have heard.  There were several funnel clouds spotted nearby and large hail (2 to 3 inch!!).  We had hail with the last cell that came through about an hour ago.  Pea sized hail (quite a bit!), heavy rain and wind.  We had just over an inch of rain in a short time.  I haven't ventured out to see how the garden fared.  I would probably sink.  Maybe it's a good thing that I'm so far behind that I didn't get most of the summer garden planted.
It looks like the weather should calm down in the near future and looking ahead at the long weekend... so far it looks lovely.  Cross your fingers.
Posted by Judy T at 3:06 PM