I did manage to get a couple of hours off this afternoon.  It was a glorious, sunny day.  I SO wanted to plant out my tomatoes but I refrained.  Instead, V and I continued to work on the coop. We worked on the joist hangers for the roof.  We're now set for the rafters to go in, frame the interior wall and put on the roof.  Not as fast as I would like it to be going, especially with rain forecast for the weekend.  I was ready to work more but V was done.  He has been working so hard lately that his arms/shoulders are about ready to give out.
But here is why we are working ourselves into the ground:
The little girls (and guy?) 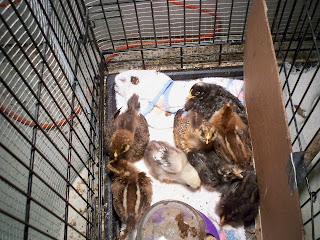 And the big girls: 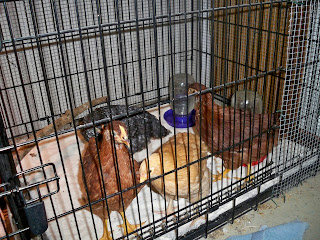 "Hey, are you going to open this door or not?"
The little ones are already starting to get a bit crowded.  It's not too bad yet but in another week or so we'll have to do something different.  But that's in the future...
Posted by Judy T at 9:49 PM